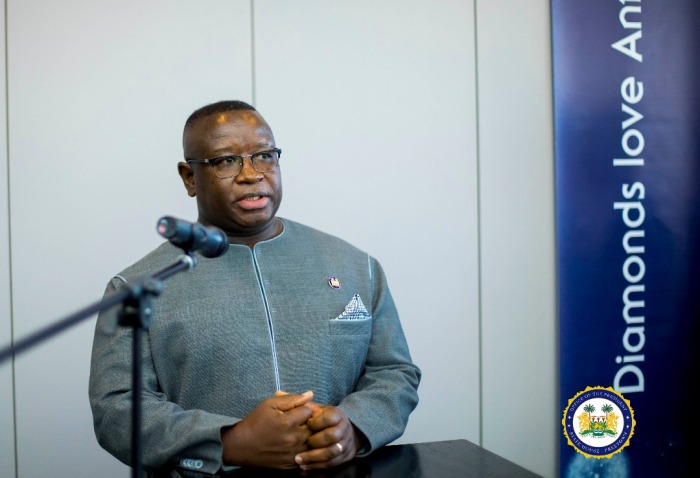 Sierra Leone President Julius Maada Bio has called for diamonds to be cut and polished in Sierra Leone during a visit to the Antwerp World Diamond Centre (AWDC) in Belgium.

Addressing board members and management of AWDC, diamond traders, miners, bankers and the press, President Bio said that Sierra Leone was a major exporter of diamonds, adding that more focus should now be placed on value addition to
diamonds in the resource-rich West African nation.

President Bio said his new government wanted a different relationship with Antwerp
World Diamond Centre to support his country with the infrastructure that would
increase the value of diamonds exported from Sierra Leone. He also said that the
country was a major exporter of diamonds but not many of its people knew about
diamonds.

He invited diamond companies, miners and traders to invest in Sierra Leone but stressed on the need for transparent and credible investment. He also said that while he recognised the strategic importance of diamonds, his new administration would like to use the proceeds from diamonds to invest in human capital development.

He told the audience that his new administration had prioritised investment in human capital through the provision of free quality education.
Welcoming President to the centre, the Chief Executive Officer, Ari Epstein, said that
President Bio’s visit demonstrated confidence in AWDC, adding that Antwerp had
great expertise to support his new government. He also praised President Bio’s
impressive leadership style, stating that: “With your commitment, it is necessary to
have ethical sourcing”.

The call by President Bio for diamonds to be cut and polished in Sierra Leone would
also create jobs and train Sierra Leoneans to use cutting-edge technology in
diamond production.

President Bio, who studied diamond valuation in South Africa, is arguably the first
diamond valuator to be elected President in Sierra Leone.

Later, President Bio was taken on a conducted tour of the Centre by the Chief
Executive Officer and he visited various laboratories for cutting, polishing, grading
and valuation of diamonds. He also visited two reputable companies dealing in
diamonds in Antwerp – Bonas and Diamcad.