Amref Health Africa and the Amref Health Africa office in Spain (Amref Salud África’) have received the Princess of Asturias Award for International Cooperation, for its effort to develop and promote public health as well as the economic, cultural and social advancement of the people in Africa. 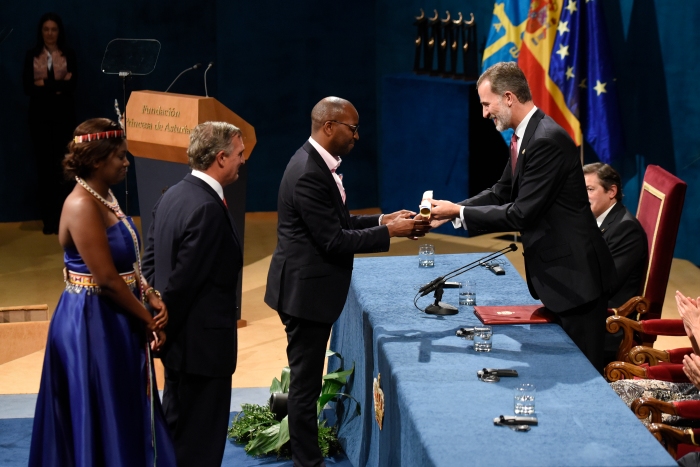 The Princess of Asturias Awards are aimed at rewarding “the scientific, technical, cultural, social and humanitarian work carried out at an international level by individuals, institutions or groups of individuals or institutions”.

This year, a total of 26 candidates from seventeen countries had been nominated for this award.

“This award serves as recognition that African communities can develop African solutions to address African problems and implement them with a helping hand from partners for lasting health change,” said Dr Githinji

Amref Health Africa’s and Amref Salud África’s candidature was put forward by Sicily K Kariuki, Cabinet Secretary for Health in Kenya and Enrique V Iglesias, 1982 recipient of the then Prince of Asturias Award for International Cooperation.

More than 80 endorsements were received for the nomination including by Health Ministers from Ethiopia, Tanzania, Uganda and Rwanda.

“Our goal is to achieve universal health coverage by 2030 in the African countries where we work. Recognitions like this bring us closer to that goal. We would like to take the opportunity to thank all the Spanish institutions and partners and especially all those who have supported us via their endorsements of this nomination for the Princess of Asturias Award,” said Dr Gitahi.

The award  which comes with 50,000€ that will be put back into Amref´s work, recognises Amref Health Africa´s work spanning over 60 years to promote health for and with Africa.

Chair of the Amref Health Africa in Spain Board, Álvaro Rengifo, remarked that “Amref in Spain is very proud to receive this award and thankful to the Princess of Asturias Foundation for this recognition, which will help build our profile in Spain and empower us to achieve the 2030 Universal Health Coverage goal.”

Now in its 38th year, the award aims to “contribute to extolling and promoting those scientific, cultural and humanistic values that form part of the universal heritage of humanity.”

Amref’s work has been rewarded with various recognitions such as the Conrad Hilton Humanitarian Award (1999), the Bill and Melinda Gates Foundation Award for Global Health (2005) and the African NGO Leadership Award (2016), among others.