Home › Uncategorized › Nearly Half the World Lives on Less than $5.50 a Day

Nearly Half the World Lives on Less than $5.50 a Day 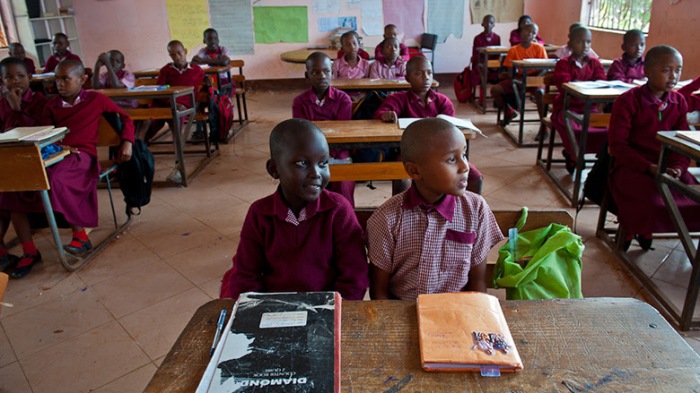 In Sub-Saharan Africa the poor suffered from multiple deprivations such as  lack of access to education and basic infrastructure services. Photo credit: World Bank

The World Bank remains committed to achieving the goal of ending extreme poverty, defined as living on less than $1.90 a day, by 2030. The share of the world’s population living in extreme poverty fell to 10 percent in 2015, but the pace of extreme poverty reduction has slowed, the Bank warned on Sept. 19.

However, given that economic growth means that a much greater proportion of the world’s poor now live in wealthier countries, additional poverty lines and a broader understanding of poverty are crucial to fully fighting it, the report says.

“Ending extreme poverty by 2030 and boosting shared prosperity are our goals, and we remain committed to them,” said World Bank Group President Jim Yong Kim. “At the same time, we can take a broader view of poverty at different levels and dimensions around the world. This view reveals that poverty is more widespread and entrenched, underlining the importance of investing in people.”

While rates of extreme poverty have declined substantially, falling from 36 percent in 1990, the report’s expanded examination of the nature of poverty demonstrates the magnitude of the challenge in eradicating it. Over 1.9 billion people, or 26.2 percent of the world’s population, were living on less than $3.20 per day in 2015. Close to 46 percent of the world’s population was living on less than $5.50 a day.

The report also goes beyond monetary measures of poverty to understand how access to adequate water and sanitation, education, or electricity affect a family’s well-being. And since the burdens of poverty often fall most heavily on women and children, the report analyzes how poverty can vary within a household.

The report finds that the incomes of the poorest 40 percent grew in 70 of the 91 economies monitored. In more than half of the economies, their incomes grew faster than the average, meaning they were getting a bigger share of the economic pie. However, progress in sharing prosperity lagged in some regions of the world. The report also warns that data needed to assess shared prosperity is weakest in the very countries that most need it to improve. Only one in four low-income countries and four of the 35 recognized fragile and conflict-affected states have data on shared prosperity data over time.

The new measures allow the World Bank to better monitor poverty in all countries, in multiple aspects of life, and for all individuals in every household.

“Piecing Together the Poverty Puzzle” is being released on End Poverty Day and will be accompanied by a launch event to be webcast on World Bank Live at 12:30 p.m. EDT (4:30 p.m. UTC/GMT).

East Asia and Pacific: The region was one of the best performers in shared prosperity: The incomes of the poorest 40 percent of the population grew on average 4.7 percent between 2010 and 2015. East Asia not only had the largest reductions in extreme poverty, but also in the proportion of people living on less than $3.20 and $5.50 per day. While extreme poverty is very low, the region saw a higher percentage of people lacking access to sanitation.

Europe and Central Asia: Many countries in the region suffered setbacks in the growth of incomes of its bottom 40. On the other hand, several economies whose bottom 40 suffered large declines because of the financial and the debt crises were recovering. Among developing regions, Europe and Central Asia had the lowest percentage of people living under the $3.20 and $5.50 poverty lines. However, in the share of people lacking schooling enrollment, it performs less well than either East Asia and Pacific or Latin America and the Caribbean.

Latin America and the Caribbean: The region saw less shared prosperity from 2010 to 2015 than in previous years as its economies were impacted by a slowdown in global commodity prices. The region had almost 11 percent living on less than $3.20 a day and over 26 percent on less than $5.50 a day in 2015. Poverty in non-monetary dimensions such as lack of access to drinking water, adequate sanitation or electricity was much less associated with monetary aspects.

South Asia: the region saw impressive growth of the incomes of its bottom 40 between 2010 and 2015. Despite a 35-percentage point decline in extreme poverty between 1990 and 2015, the region registered only an 8 percent decrease in people living on less than $3.20 a day, and over 80 percent of the region still lived below $5.50 per day in 2015. Also, the number of people in the region living in households without access to electricity or adequate sanitation was far greater than those living in monetary poverty.

Sub-Saharan Africa: A third of the countries in the region experienced negative income growth for the bottom 40 percent of their populations. The region with the largest number of extreme poor, Africa saw its population nearly double between 1990 and 2015, with one of the largest increases in population being for those living on less than $3.20 and more than $1.90. The poor suffered from multiple deprivations such as low consumption levels and lack of access to education and basic infrastructure services.