Sierra Leone: President Bio says ‘Access to justice is central to our development in Sierra Leone’

Sierra Leone President Julius Maada Bio has said that access to justice is central to the development of Sierra Leone while making his keynote address at the ‘Justice 2030: Time for Action’ high-level event in New York.

Addressing lawyers, diplomats, activists and members of Open Society Foundations on Tuesday 25 September 2018, President Bio said that access to justice for all strongly resonated with Sierra Leone’s post-conflict peacebuilding experience and the progressive evolution of the country’s democracy. He said that his government believed that income and social disparities could result in disparities in access to justice.

“We believe that citizens should be treated fairly and equally in criminal and civil proceedings and we can narrow or even eliminate the gaps between rich and poor (in terms of access to justice) by providing assistance to those who cannot afford the cost of formal legal processes,” President Bio said.

As a President who believes in private sector development and how access to justice can give confidence to investors, President Bio said: “We believe that by assuring businesses that do and want to do business in our country that they have access to all legal rights provided for in our laws, we do provide a secure environment for investment and the growth of business. We believe that the regulatory environment should be friendly, transparent, predictable, and reassuring and all investments and businesses are secure.” 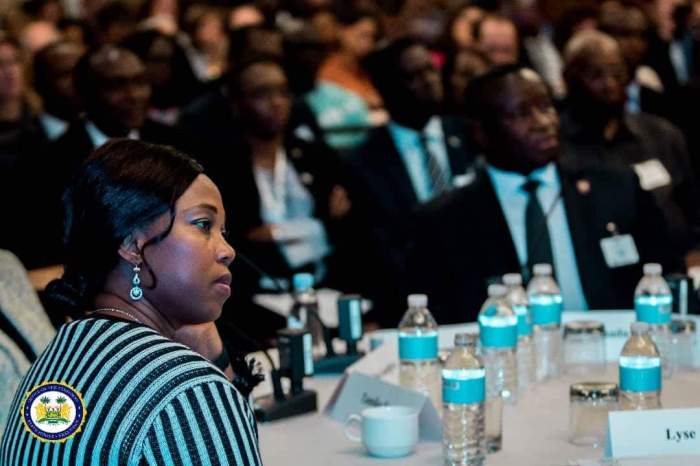 As a country, President Bio also explained the various efforts that were being made to grant citizens access to justice through the Legal Aid Board, paralegal services, alternative dispute resolution mechanisms and the reform of the correctional services. He also praised the work of NGOs and civil society groups like the Sierra Leone Bar Association, LAWYERS, AdvocAid, Timap for Justice, OSIWA and others for their efforts at increasing access to justice for ordinary people.

With a strong determination to reform the justice sector, President Bio highlighted his Government’s plan for the Justice Sector, focusing on convening a national dialogue on justice as a way to discuss how to reform and make the justice sector more effective; review the current Justice Sector Reform Strategy and Investment Plan; strengthen the work of the Legal Aid Board and train more paralegals to support the justice sector in the country’s remote rural communities; establish family and small claims courts in all parts of Sierra Leone to deal with family and neighbour related cases, debt, consumer complaints; low-level land and property disputes and thus free up the Magistrate and High Courts to deal with more complex cases.

President Bio ended his address by expressing commitment to working with the World Bank, OSIWA and other partners to identify funding sources to finance access to justice initiatives that would augment government’s current commitment levels to Sustainable Development Goal 16.

The ‘Justice 2030: Time for Action’ event was organized by The Elders, Open Society Foundations and Task Force on Justice. Sierra Leone is presently Co-Chair of the Justice Task Force. President Bio was accompanied to the event by his wife, First Lady Fatima Bio, Speaker of Parliament, Dr Abass Bundu, Chief Minister, Prof. David Francis and a host of others. Also in attendance at the event was Dr Kandeh Kolleh Yumkella, Leader of National Grand Coalition, who was also part of the President’s delegation to the United Nations General Assembly.

Like Loading...
‹ Diet rich in fried and processed foods linked to increased hypertension in black Americans
WHO kicks off global initiative to treat children with cancer ›