Sierra Leone’s Minister of Finance, Jacob Jusu Saffa, says the economy of the small mineral-rich West African country is struggling and blames policies of the past regime as the main reason. 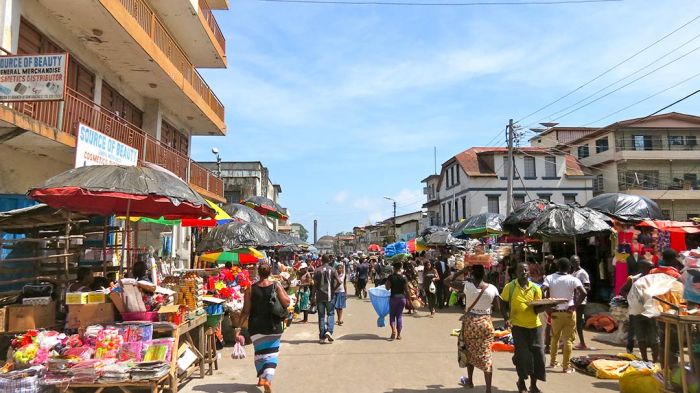 Saffa says the economy could have crashed had it not been for some of the prudent measures they, as a new government, have initiated since coming to power more than 100 days ago.

“We’ve reluctantly kept expenditure to the barest minimum even at our own expense and we’ve taken measures to generate revenue,” he says, adding that the Presidential Orders on the economy largely helped in restoring fiscal discipline.

Furthermore, Saffa cites, internal revenue mobilization has increased appreciably just within the first three months of the government and that the Single Treasury Account (an effort to consolidate government revenue) is helping greatly in that direction.

“We were in negative because we couldn’t pay salaries without resorting to Bank overdrafts, but that’s not happening anymore since we took over Government as we are now paying wages and salaries on time without recourse to Bank for extra borrowing,” Saffa boasts.

He continues: “We are running this government on our own meagre resources and that’s a huge achievement for a new administration,” he boasts, and notes that by keeping expenditure low the Government has achieved stabilization of the economy.

However, the gradual depreciation of the Leone coupled with high inflation are hitting the country’s economy very hard. In July 2018, the government announced that they are removing subsidy on petroleum products, an International Monetary Fund pre-condition for further budgetary support. The past administration refused to do likewise in fear of the implications on the elections that they eventually lost.

“The increase in food indices in all the centers in the month of August 2018 was as a result of the rainy season, which is usually the lean season in terms of food production and distribution, and this created some temporary scarcity in the market. This is reinforced by the depreciation of the local currency which has translated into inflationary expectations and hence increases prices,” the report explains. It further confirms that food prices increased significantly in the month of August 2018 when compared to July of the same year.

With prices of basic commodities and transport fare shooting up, the impact on the livelihood of the average Sierra Leonean is becoming unbearable.

Abdulai Turay, a resident of Freetown who works for government, complains that the economic situation is getting more difficult for people like him who earn what he describes as a meagre salary. He says prices of essential commodities keep increasing almost on a daily basis whilst salaries are just still the same. He earns a little over a million Leones.

“I think government needs to act fast and address the situation,” he urges. “It’s challenging for low income earners like us with huge family responsibility. This should not be allowed to continue; let them try and fix the economy, that’s what we care about.”

Hajaratu Sesay, a petty trader at Kroo Town Road Market, explains in defence of charging high for her goods: “We do not just wake up one morning and increase prices. When fuel prices go up transport fare will surely go up and we pay more to transport our goods which is why we have every reason to increase prices on our commodities.”

The case is generally the same for every other trader; some even defend their actions by blaming the depreciation of the Leones.

To this, Saffa says government recognizes the social impact of some of the policy reforms on the people but they will also be implementing mitigating measures.

“We have families, we also buy things and we fully understand the situation. But as a government we are doing all we can to stabilize the economy and address the problem; we all just need to be patient a little while as we will get there soon,” Saffa appeals.

On the exchange rate and depreciating Leone, Saffa suggests the non-provision of budgetary resources can largely be a reason for the pressure on the foreign exchange.

The country’s once booming iron ore mining sector is on an all-time low with the main Chinese owned Shang-Dong Mining Company folding up.

“We must also consider the uncertainty that sets in an economy when there is a change of government,” notes Saffa, “People mostly save their money with the Banks in foreign exchange.”

Nevertheless, Saffa confidently promises that by the end of September 2018 they are assured of receiving budgetary support as engagement with the International Monetary Fund is at an advance stage.

Yet Saffa agrees that there is the need for economic diversification to save the country from the over dependence on the mining sector, which used to be the pillar of the economy but which has proved to be unsustainable.

“We are looking at three critical sectors- agriculture, tourism and fishing- which have so far accounted for increased revenue generation since we came to power,” says Saffa.

Similarly, Economist Peter Kaindaneh agrees that for a sustainable thriving economy, government needs to diversify and pay more attention to the agriculture sector.

“We import virtually everything and we are among the highest in per-capita consumption of rice; if only we can cut that down to half then we can lessen the pressure on foreign exchange and strengthen the economy,” Peter says.

Even though he disagrees with Saffa that the economy has been stabilized, Peter says there has been some strong commitment on revenue mobilization and fiscal discipline as against what used to happen.

“There is the commitment to enforce the law, the presidential orders on the single treasury account and duty waivers have largely helped with revenue mobilization and that’s impressive,” Peter notes.

“Despite a little increase in economic activities after the March general elections, Sierra Leone’s economy will continue to experience headwinds resulting from uncertainties caused by the elections,” the Mission warned in a statement.

Saffa is however hopeful that they will commence renegotiation with the IMF and will forge a new agreement that will support the national budget and provide more resources.

Like Loading...
‹ PAUWES Celebrates its Third Graduating Cohort of 79 Students from Across Africa
Sierra Leone: A call for patriotism and national call to action ›