For 60-year-old madam Isatu Sesay, the earth is like a woman; whatever you give it, it gives you back in manifold- although it may take a little while. That is her main reason for investing in rice farming. 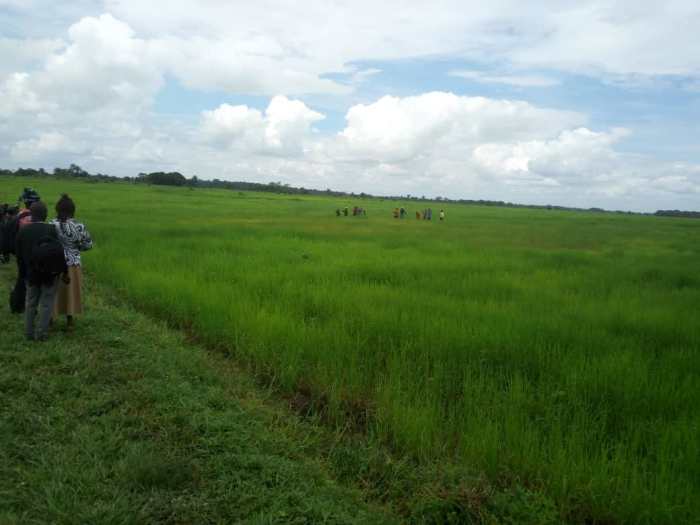 “When you give the earth one seed of rice, it will give you hundreds in return,” she says, “You don’t have to have a Master’s Degree to know that. The earth is like a woman’s womb that nurtures a sperm cell for nine months and gives back a bouncing baby. We are not actually taking advantage of the vast acres of arable land we are blessed with in this country.”

Commonly called ‘Takileneh’ (a Themne word which means ‘Let’s look out for one another’) in her home town of Rokupr, Kambia District, Northern Sierra Leone, madam Sesay is determined to fight hunger and feed her country folks through her growing rice plantation. From an ‘Osusu Master’, collecting One thousand Leones per day from members of her community, madam Sesay saved her little earnings until she decided to venture into rice farming in 2002 with a bushel from the Government of Sierra Leone through the Ministry of Agriculture. Her first farm in Gbainkfain, Kambia District, produced 13 bushels which encouraged her to do a second planting in the same rainy season to increase production to 28 bushels.

Within two years of farming, through support from government with a tractor and fertilizers, she produced 500 hundred bags of rice which she stored at the Agricultural Business Center (ABC) at Rokupr. Now she supplies rice to the World Food Program (WFP) Sierra Leone.

Meeting the increase in demand for her rice means expanding her farm to more than 130 hectares and employing locals as managers to oversee her Inland Valley Swamps (IVS).

“My son,” she tells me, “you don’t have to be educated to know that farming (agriculture) is the way to food security in a country like ours. If we have been paying real attention to agriculture as we have been doing to other sectors such as mining, we should be able to feed ourselves and even export most of our produce, especially rice.”

A country that was once an exporter of rice to neighbouring countries, Sierra Leone is now a net importer of rice, spending about US$130 million annually to import the staple commodity. In the 2018 Budget Statement, this figure is projected to increase to at least US$200 million.

Yet, only last year, 2017, the small West African country was rated the third hungriest country in the world (Global Hunger Index 2017).

Successive Governments have shown some understanding of the challenges facing the agricultural sector as well as its potentials as an ‘engine’ for socio-economic growth, and have expressed plans to mechanize and encourage private sector investment.

Yet, in a country with over seven million people who largely depend on imported rice as staple food, the efforts of madam Sesay and other small scale farmers to attempt to satisfy local demand are not easily seen or appreciated.

Lack of machines still poses a huge challenge for local farmers such as madam Sesay. For instance, she employs the services of women to fetch fire woods in order to par boil the hundreds of tons of rice to make it marketable. Yet many people don’t consume ‘Bara Bara’– locally boiled rice- which is not also encouraging.  For the vast majority of Sierra Leoneans to depend on the locally produce rice as their staple food, it has to meet international standards which can be said of the favored imported rice.

But as a matter of fact, locally produced rice is far from meeting the volume for external markets and international standards due to the crude system of harvesting and handling still employed in its production.

According to the Deputy Director General and Research Coordinator of the Sierra Leone Agricultural Research Institute (SLARI), Dr. Martin L. Gboku, for the country’s rice to be accepted and to attract international investors or markets, it has to be free from stones and unwanted particles which come through the system of harvesting currently employed.

“Have you ever seen Pussawa or Fen fen rice with stones? Definitely no! This is because a mechanized system is involved in all stages of the entire production process,” notes Dr. Gboku.

Equally, at the heart of Kambia district is the Rokupr Agricultural Research Center, which was established in 1934 as a Rice Experimental Station with the aim of developing sustainable food production systems which could be readily adopted by the farming community in Sierra Leone.

According to Mr. Steven Ngaujah, a Research Officer at the center, mechanized farming does not stop with the breeding of seeds or recommending which area is suitable for planting the various seeds, but also the timely application of packages such as fertilizers, herbicides and fungicides to stop pests from destroying the crops which according to him improves production.

“ROK 35 can yield between 3 to 4 tons per hectares with the full application of the package but without the full package, that amount will be between 1 to 1.5 tons per hectares. The use of tractor, the timely handling of weeds and the application of fertilizers on crops have a crucial role to play in mechanized farming,” says Nguajah, who is also the Rice Breeder and Focal Person for Africa Rice Breeding Task Force in Sierra Leone.

However, local farmers, including madam Sesay, find it difficult to understand why they are still faced with such traditional challenges despite hearing about the huge donor support to the sector over the last decade or more.

“When you consider the amount of donor monies coming into the agricultural sector you wonder why it is not reflected in our farms,” laments madam Sesay. “Most of our able bodied young people who used to help us till the land have migrated to the capital city. So the need for machines is a must.”

Additionally, according to the National Coordinator and Policy Analyst of the National Federation of Farmers in Sierra Leone (NaFFSL), Brima Babo, members are struggling to access donor funds/support meant for the sector.

“It seems as if the only people benefitting are the ‘portfolio farmers’ instead of us the real farmers,” alleges Babo.

“This country has 396 Agricultural Business Centers, but none has actually positively impacted real farmers like us. If only successive governments have been putting serious attention on farming, do you think we will still depend on imported rice for our daily meals?” he asks rhetorically.

Meanwhile, as part of his New Direction plans to boost the agricultural sector and diversify the economy, President Julis Maada Bio has encouraged politicians to invest in farming or at least own a farm as a pre-condition for political appointment.

While madam Sesay and her colleague farmers are not looking for political appointments they look forward in earnest to where the New Direction will lead their farms to.

Note: This story was supported by the Media Reform Coordinating Group through the Sierra Leone Reporters Union mentorship program 2018 with support from the United Nations Development Programme (UNDP).