Côte d’Ivoire: No Amnesty for Serious Crimes of 2010-11 Crisis

Should Not Include War Crimes, Crimes Against Humanity

There should be no amnesty for those responsible for war crimes, crimes against humanity and other serious human rights violations committed in Côte d’Ivoire’s 2010-11 post-election crisis, 11 national and international human rights groups said on August 7, 2018. 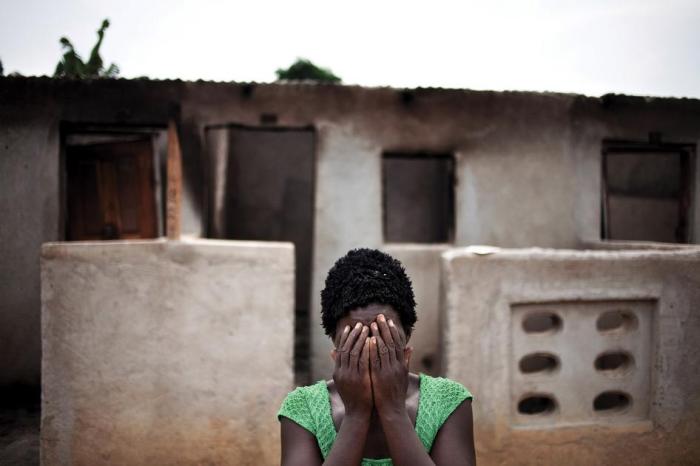 A woman hides her face after recounting how pro-Ouattara forces killed two of her children and her brother during the post-election violence in Duékoué, western Côte d’Ivoire. Duékoué was site of one of the worst massacres of the crisis, but no one from the pro-Ouattara forces has been arrested for the crimes committed there. © 2011 Peter Dicampo

Contrary to all commitments for justice since 2011, President Alassane Ouattara announced on August 6, 2018 that he would grant an amnesty to 800 people accused of or convicted of crimes related to the 2010-11 crisis or subsequent attacks against the state, which could include people implicated in serious human rights crimes.

Ouattara said that the amnesty would not apply to 60 military members and members of armed groups who committed “blood crimes” during the post-election violence. Ivorian judges, however, have indicted far more than 60 people for crimes against humanity and war crimes related to the post-election crisis, including high-level military and political leaders from both sides of the conflict. It is now unclear who among these indictees will ultimately face justice.

“To decide, after seven years of judicial proceedings involving hundreds of victims and alleged perpetrators, that only 60 people will face justice is not only an arbitrary decision but will be an act of disrespect to victims if it allows perpetrators of war crimes and crimes humanity to escape prosecution,” the 11 organizations said.

The Ivorian government had created a National Commission of Inquiry (Commission nationale d’enquête (CNE)) to identify and document crimes perpetrated between 2010 and 2011, and a special investigation unit (Cellule spéciale d’enquête et d’instruction (CSEI)) to prosecute those responsible.

After years of work, the special cell has charged more than 150 people for “blood crimes”, including both Gbagbo and Ouattara allies. For the attack on Duékoué in March 2011, for example, where more than 300 people were killed by pro-Ouattara forces, some twenty people have been charged. More than 20 people have been indicted for the suppression of protests by Ouattara supporters in Abidjan by the Gbagbo-era security forces. Dozens of people, from both the Ouattara and Gbagbo camps, have also been charged for attacks in the Abidjan neighborhood of Yopougon during the post-election crisis, and another 80 indicted for the attack on Nahibly refugee camps in 2012, including Dozo traditional warriors and members of the Ivorian army.

International law mandates prosecutions for serious crimes, such as crimes against humanity and war crimes, to ensure victims’ rights to truth and justice are respected. Major international treaties to which Côte d’Ivoire’s is a party – the Convention against Torture, the Geneva Conventions, and the Rome Statute of the International Criminal Court – provide that allegedly responsible for serious crimes must be fairly prosecuted. An amnesty for serious crimes would also be contrary to the principles of the founding charter of the African Union and the African Charter on Human and Peoples’ Rights.

President Ouattara has repeatedly promised to deliver justice to victims, stating in April 2015 that: “Everyone responsible for atrocities will be tried…I find it unacceptable that people who killed, who burned people to death, or who raped women, continue to behave as if they are angels, as if they did nothing wrong.” On May 9, in response to a letter from our organizations, Côte d’Ivoire’s chief prosecutor committed to quickly organize trials related to the post-election crisis.

“If the Ivorian government goes back on repeated commitments to prosecute war crimes and crimes against humanity, it will open the way for legal proceedings before national and international jurisdictions which prohibit amnesties for the most serious crimes,” the 11 organizations said. “The government should instead ensure consult with the Special Cell to ensure that the amnesty doesn’t apply to people charged with serious crimes.”

The 2010-2011 crisis began when then-incumbent president, Laurent Gbagbo, refused to cede power to Ouattara following the November 2010 presidential elections. In the resulting five months of violence and armed conflict, at least 3,000 people were killed, and more than 150 women raped. Armed forces on both sides targeted civilians based on political – and at times, ethnic and religious – affiliation.

On the request of President Ouattara and the Ivorian government, the International Criminal Court is also investigating crimes committed by both pro-Gbagbo and pro-Ouattara forces during the 2010-11 violence. Laurent Gbagbo is currently on trial at the ICC with a close ally, Charles Blé Goudé, for crimes against humanity.

The Ivorian government has so far refused to transfer Gbagbo’s wife, Simone, to The Hague, arguing that Ivorian courts are willing and able to try cases related to the post-election crisis. Simone Gbagbo herself was due to be retried by Côte d’Ivoire’s highest criminal court for war crimes and crimes against humanity after her March 2017 acquittal was overturned by the Supreme Court in July. However, Ouattara listed Simone Gbagbo, who was serving a 20-year sentences for other offenses related to the post-election crisis, as one of the people who would benefit from an amnesty, casting doubt on the willingness of the Ivorian justice system to try her for her alleged role in crimes against humanity or war crimes.

“Côte d’Ivoire’s history shows how impunity can perpetuate political violence and human rights abuses. Ahead of the 2020 presidential elections, an amnesty for the worst crimes of the 2010-11 post-election crisis would send a dangerous message that political leaders who resort to atrocities can avoid sanction,” said the 11 organizations.