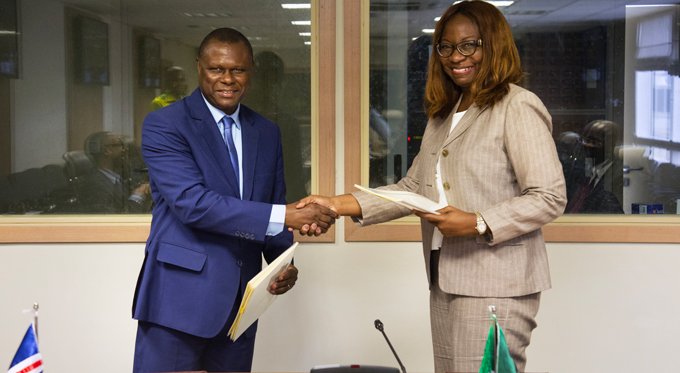 The African Development Bank and Cabo Verde have signed a 20 million euro loan agreement to revitalize the economy of the West African coastal island.

The loan, signed 2 August 2018 in Abidjan, is part of a two year programme of up to 40 million euros to be disbursed in two equal instalments in 2018 and 2019. The funds will help the new Cabo Verde Strategic Plan for Sustainable Development (2017-2021), which the Bank is supporting through its private sector competitiveness and local economic development programme.

“This programme aims to strengthen the contribution of the private sector and local entities to growth and job creation,” said Marie-Laure Akin-Olugbade, the Bank’s Director-General for West Africa. “It will help to facilitate business activity and competitiveness, will accelerate local development and will increase the contribution of decentralization to growth.”

“The signing of this agreement is very important for the consolidation of the Cabo Verde economy. The private sector competitiveness and local development programme will help to put our country’s growth on a sound footing.” Inácio Felino Rosa De Carvalho, Cabo Verde’s Ambassador to Côte d’Ivoire, said in response.

Carvalho added that the support would lead to an improved quality of life for the people of Cape Verde.

The Cabo Verde government has invested heavily in infrastructure in recent years in a bid to diversify the economy of the island. The challenge now is to empower the private sector to drive further growth, job creation and poverty reduction.

The Bank’s active portfolio in Cabo Verde, is worth over 85.4 million euros, disbursed to energy and transport projects as well as water and sanitation, agricultural and governance sectors.

The Republic of Cabo Verde is composed of 10 volcanic islands and eight islets located in the central Atlantic Ocean, some 450 kilometres west of Senegal. It has a land area of 4,033 square kilometres, and 700,000 square kilometres Economic Exclusive Zone (EEZ). The population is estimated at 500,000, 55.7% of whom are located on the main Santiago Island.

Like Loading...
‹ Stopping and eradicating Ebola in the DRC need everyone onboard
The Migration “Crisis” Is Not What It Seems: The Current Opportunity of Migration to the EU and Elsewhere ›