The African Union (AU) Commission, through the Africa CDC, will procure six laboratory diagnostic (Genexpert) machines and 2,000 cartridges (testing kits) for a total of US$ 147,000 to be donated to the Government to support diagnosis of Ebola virus diseases and other outbreak diseases. 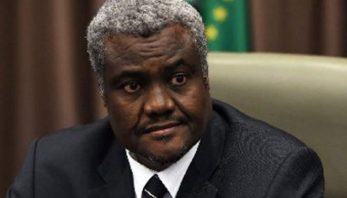 Moussa Faki Mahamat, commends the Congolese Government for its swift and effective response

This comes following official announcement by the Government of the Democratic Republic of the Congo, on 24 July 2018, of the end of the Ebola virus outbreak in the country.

The Chairperson of the Commission of the African Union, Moussa Faki Mahamat, commended the Congolese Government for its swift and effective response since the outbreak was declared on 8 May 2018 in the province of Equateur.

The last case that tested negative was 42 days ago. This, as per the World Health Organization guidelines and International Health Regulations, marks the end of the outbreak.

The Chairperson of the Commission notes that the timely declaration of the outbreak, in accordance with the International Health Regulations, as well as the leadership and pro-activeness demonstrated by the Congolese Government, allowed a coordinated and efficient intervention of all concerned partners to swiftly contain the outbreak.

“The African Union Commission, through the Africa Centers for Disease Control and Prevention (Africa CDC), has made a significant contribution to the efforts aimed at containing the outbreak, in support of the Congolese-led response. The Africa CDC deployed health personnel in the affected areas, trained more than 300 local experts, procured diagnostic equipment, and supported the DRC Ministry of Health in central coordination of the response at national level,” he noted, adding that the African Union will continue to support the efforts of the Congolese Government during the 90-day period of enhanced surveillance following the official end of the Ebola outbreak.

The Ministry of Health of the Democratic Republic of Congo (DRC) declared the end of the Ebola Virus Disease (EVD) outbreak in Equateur province on 24 July 2018, after sustained national-led efforts to contain it within the affected areas.

The outbreak spread across three health zones, namely Bikoro, Iboko and Wangata in the Equateur Province, resulting in a total of 54 confirmed cases, with 33 EVD-related deaths.

On 8 May 2018, the Ministry of Health of the DRC declared a new outbreak of the EVD in the Bikoro health zone. This was the 9th outbreak of EVD over the past four decades in the country.

Following the declaration of the outbreak, the African Union (AU) Commission, through the Africa Centre for Disease Control and Prevention (Africa CDC), took a number of steps to contribute to the Government-led response, including the activation of its Emergency Operational Centre (EOC) to monitor and coordinate the AU response from the Headquarters; deployment of an advanced team of two epidemiologists within 48 hours following the outbreak, to support the Congolese Government efforts; and deployment of 37 staff both at Headquarters and to the field, including 21 surveillance experts in the affected health zones, as part of the Government-led response.

Like Loading...
‹ IOM Allocates USD 75,000 to Aid Victims of Lao Dam Disaster
Could a nanofiber help fight the obesity epidemic? ›