The Sierra Leone police has warned Sierra Leoneans to stop commenting on issues dealing with the President Executive Orders, the Governance Transition Team (GTT) Report, and appointment of public officials. 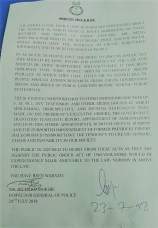 released due to a nationwide outcry, and then, Monday’s intimidation of the leader of the ADP party, Mohamed Kamarainba Mansaray, and invitation for questioning at the Criminal Investigation Department (CID) for comments he made on 98.1 Democracy Radio and AYV.

The 1965 Public Order Act has often been used by the government to suppress critiques and opponents in society, especially the media in Sierra Leone.

The Sierra Leone Police (SLP) is seriously concerned about the manner in which critical issues bordering on state security and issues of public concern are being discussed/ published in the electronic, print and the social media which have the tendency to create insecurity, instability and fear in the minds of the people.

In as much as people have the right to discs issues, yet this should be done within the confines of the law and should be done responsibly and factually. It has been observed that some people discus governance issues publicly in which they have little or no knowledge in. People should always research, cross checked governance issues and issues of public concern before making public statements.

The SLP having monitored recent discussions/ broadcasts on F.M. 98.1, AYV Television and other media houses in which misleading, disrespectful and inciting statements were made on the President Executive Orders, the Governance Transition Team (GTT) Report, Appointment of Ambassadors and deputies, other appointments, removal of fuel subsidy and the purported impoundment of former President Ernest Bai Koroma’s passport have the tendency to create, tension, chaos, and instability in our society.

The public is advised to desist from these acts as they are against the Public Order Act of 1965. Violators would be expeditiously made amenable to the law. Nobody is above the law.

You have been warned