Home › Development › IMF implores South Africa: the time is now to put the South African economy on a trajectory toward strong and inclusive growth

IMF implores South Africa: the time is now to put the South African economy on a trajectory toward strong and inclusive growth

An International Monetary Fund (IMF) team led by Ana Lucía Coronel has informed South African authorities that the time is now to put the South African economy on a trajectory toward strong and inclusive growth.

The team noted that by removing policy and regulatory uncertainty, combined with forceful implementation of an ambitious reform agenda would further strengthen confidence, attract private investment durably, support job creation, and distinguish South Africa further from other EMs at a time sentiment towards EMs is weakening.

“Growth would then rise above the current level, and support better living standards for all South Africans,” Coronel noted.

The team visited South Africa in May 28-June 11, 2018 to conduct its regular Article IV surveillance activities. Discussions focused on measures and reforms to reignite growth and reduce poverty and inequality.

The team also noted on the challenging outlook that South Africa’s potential is significant, yet growth over the past five years has not benefitted from the global recovery. The economy is globally positioned, sophisticated, and diversified, and several sectors—agribusiness, mining, manufacturing, and services—have capacity for expansion. Combined with strong institutions and a young workforce, opportunities are vast. However, several constraints have held growth back. Policy uncertainty and a regulatory environment not conducive to private investment have resulted in GDP growth rates that have not kept up with those of population growth, reducing income per capita, and hurting disproportionately the poor.

This year, growth is projected to be somewhat higher at 1.5 percent —but still insufficient to make a meaningful dent in unemployment, poverty, and inequality. South Africa is one of the most unequal economies in the world. More than half of the population lives in poverty and 27 percent of the labor force is unemployed. Absent reform implementation, growth is unlikely to exceed 2 percent over the medium term. 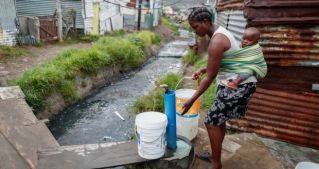 The authorities’ stated priorities of strengthening governance and promoting employment present an opportunity to accelerate the growth momentum. Measures adopted to tackle corruption, such as changes in boards and/or management of major state-owned enterprises (SOEs), an inquiry into tax administration, actions to strengthen procurement, the signing of contracts with independent power producers, and in general, the intention to eliminate wasteful expenditure are welcome. However, to durably improve growth and lift people out of poverty, these actions need to be followed by strict enforcement of good regulations, such as the Public Financial Management Act, and the implementation of a broad set of reforms.

Materially turning the economy around toward strong and inclusive growth will require swift implementation of a bold reform agenda. Reforms in product and labor markets must span all sectors of the economy, and implementation carried out expeditiously.

Public debt has risen, depleting buffers, and leaving little room for fiscal policy to support growth. On the back of high expenditure levels, public debt as a share of GDP has doubled during the last decade, reaching 53 percent of GDP in 2017, and pushing up public-sector gross financing needs. In the past fiscal year, the fiscal deficit was more than 1 percentage point of GDP above the budget target, as revenues underperformed, affected by low growth, and expenditures were pushed up by bailout costs from loss-making SOEs.

Fiscal consolidation is needed to strengthen public finances. The moderate fiscal consolidation envisaged in the 2018 budget is a step in the right direction. However, using IMF staff’s more conservative growth projections, debt would continue to rise in the medium term. To ensure that debt remains contained at comfortable levels and policy buffers are replenished, staff recommends taking additional measures—yielding ¾–1 percent of GDP—over the next three years. This proposal reasonably balances the trade-off between adjustment and growth. Subjecting macroeconomic assumptions to independent scrutiny to set realistic expenditure ceilings, or alternatively adding a debt ceiling to the fiscal framework could also help achieve the debt objective.

Measures to contain spending and enhance tax collection are needed. A large public-sector wage bill relative to the size of the economy and to that in many peer emerging markets (EMs), is at the center of the fiscal expansion. Therefore, rationalizing the public-sector wage bill becomes a priority. Other adjustment measures, which will also enhance the ability of fiscal policy to address inequality, include boosting the efficiency of spending, such as education subsidies and transfers to public entities, and eliminating irregular and wasteful expenditure. Forcefully strengthening tax administration will complement these efforts.

Monetary policy to anchor inflation expectations at a lower level

Should fiscal consolidation stabilize debt, the monetary policy stance appears appropriate. However, monetary policy should be cautious given fiscal risks and the need to build buffers. While inflation expectations are well anchored, they remain close to the upper end of the inflation targeting band. Staff welcomes the authorities’ increased focus on lowering inflation expectations toward the mid-point of the band, which could be complemented by explicitly adopting a mid-point within a range at an opportune time. Lower inflation will be better aligned with that of partners, avoid erosion of competitiveness, and benefit the poor. Staff welcomes enhancements in central bank communication, and encourages continued efforts to increase transparency. The floating rand cushions the economy against shocks, but opportunistically building international reserves would strengthen resilience.

Preserving financial sector stability is a priority. The authorities’ introduction of the Twin Peaks regime provides a welcome overhaul of the regulatory framework. While the overall banking sector is well capitalized and profitable, monitoring pockets of vulnerabilities in small, non-systemic banks is essential. Devoting increased resources to regularly conduct top-down stress tests will be helpful. The planned entry of new banks can boost competition, reduce user charges, and improve access to credit for SMEs. Combined with the increased focus on the role of Fintech, greater competition can also help promote financial inclusion.
Balance of risks

Downside risks to the outlook are prominent. On the upside, quick and comprehensive reform implementation would boost business and consumer confidence and in turn productivity, investment, and growth. On the downside, however, spending pressures —arising for example from weak SOEs or increasing public sector compensation—would heighten financing costs and weigh on growth. Externally, tighter global financial conditions and capital flow volatility recently experienced by EMs bring to the fore a risk of sudden reversals in investor sentiment. Structurally weak growth in key advanced markets, or a disruption in trade due to growing protectionism could widen the fiscal and current account deficits, and dampen growth. Weakening growth in South Africa could have negative and lasting spillover effects on neighboring countries.