The UN Migration Agency on Monday helped some 101 Ethiopian migrants leave Yemen through Hudaydah Port as clashes grew closer to the area.

The migrants are currently travelling via the Gulf of Aden to Djibouti, which they will transit through on their way home to Ethiopia. IOM is providing transport assistance at all stages of the journey in cooperation with its Government partners. 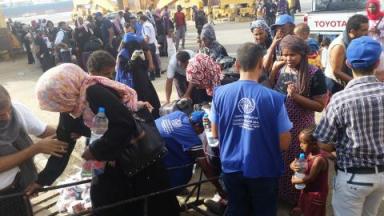 IOM assisting some of the Ethiopian migrants prior to departure from Yemen yesterday. Photo: IOM

The group that left Yemen around noon yesterday, included nearly 51 women and 33 children, who had become stranded in the country. They are the most vulnerable cases from a larger group of about 300 migrants in total, who IOM will help leave Yemen in the coming days provided weather conditions are conducive to sea travel and the security situation allows for the movement.

The majority of the 300 migrants had been in a Sana’a holding facility run by the authorities, which Mohammed Abdiker, IOM Director of Operations and Emergency, had visited at the start of this month. Some others from had been staying with host families. IOM works with families to host vulnerable cases as they wait for voluntary humanitarian return assistance. IOM provides meals, aid items, psychosocial support and health assistance to the migrants living with these host families.

In 2017, 100,000 migrants entered Yemen, of whom the majority were Ethiopian and some were Somali migrants. They were typically headed to the Kingdom of Saudi Arabia in search of work and better living conditions. Even just in the period 6-12 May of this year, IOM’s coastal search and rescue teams for migrants assisted 313 new arrivals (80 boys and 233 men) in Lahj Governorate with information, food, water, emergency aid items and medical assistance, as necessary.

Both while travelling to and in Yemen, migrants are abused by smugglers and other criminals, including physical and sexual abuse, torture for ransom, arbitrary detention for long periods of time, forced labour and even death. Some migrants get caught up in the conflict, sustaining injuries or dying from shelling, and some are taken to detention centres, both official and unofficial.

Through its Voluntary Humanitarian Return programme, IOM is providing transportation and return support from Yemen to the migrants’ final destinations in their home countries.

In 2017, IOM helped around 2,900 migrants and refugees return home from Yemen: 73 per cent of them were Somalis, 25 per cent Ethiopians and 2 per cent other nationalities. IOM has also helped 298 Ethiopian and 1,064 Somali migrants and refugees return home voluntarily to date (30/05) in 2018. Assisted spontaneous returns of Somali refugees are carried out in collaboration with UNHCR, the UN Refugee Agency.

In Yemen, IOM provides additional humanitarian assistance to migrants, including health care, shelter and aid items and psychosocial support, while also supporting displaced and conflict affected Yemenis. In Somalia, Ethiopia and Djibouti, IOM also provides emergency support to migrants starting out their journeys, while in transit and when returning.

“Thousands of migrants are stranded in Yemen and are in desperate need of assistance and protection, as well as the international community’s general attention and support,” said Abdiker, following his recent visit to Yemen. “When I was in the country, I met with many of these young migrants, who we helped leave Yemen today. They told me that they about their shocking experiences and that they wanted to go home. No migrant should be stranded in a conflict. However, there are reasons why they left their countries and without further support when they get home, it is likely they will attempt the perilous journey again. Right now, IOM is only funded to provide reintegration support to some vulnerable cases but not the majority of Ethiopian returnees from Yemen,” added Abdiker.

This return movement from Yemen is funded by the US Department of State Bureau of Population, Refugees, and Migration (PRM), the Government of Germany and the Kingdom of Saudi Arabia Fund.