In the first few months of his presidency, President Donald Trump has aggressively pursued his “America First” agenda. On Monday, March 6, the president outlined his first budget proposal, which largely reflects his bid to “Make America Great Again.” In doing so, he has proposed to increase military spending by around $54 billion while reducing government expenditure in non-defense programs. Although foreign aid only accounts for 1 percent of the federal budget, it will undergo some of the biggest cuts in spending.

As a region, Africa accounts for around 20 percent of U.S. aid, with Egypt, Kenya, and South Sudan being the biggest beneficiaries. Although critics argue that lowered public international spending will adversely affect development projects, this reduction should also be seen as an opportunity for the continent to rise and for the relationship between the U.S. and Africa to evolve.

Africans must identify priorities, define, and implement them—not be reactionary to the politics of the West.

Reducing Foreign Assistance: A Blessing or a Curse?

African countries have been recipients of foreign assistance since their independence. It is undeniable that some U.S. development assistance programs, especially the people- and country-centered ones such as the Millennium Challenge Corporation (MCC) and the Africa Development Foundation (ADF), have shown lasting results in programs that stimulate local economies and reduce aid dependency (such as sustainable agriculture, youth entrepreneurship, and improved access to power). Despite these successes, many experts argue that the provision of foreign assistance has, at times, developed a culture of dependency in Africa and fostered paternalism—as opposed to partnership—by the U.S. and elsewhere. 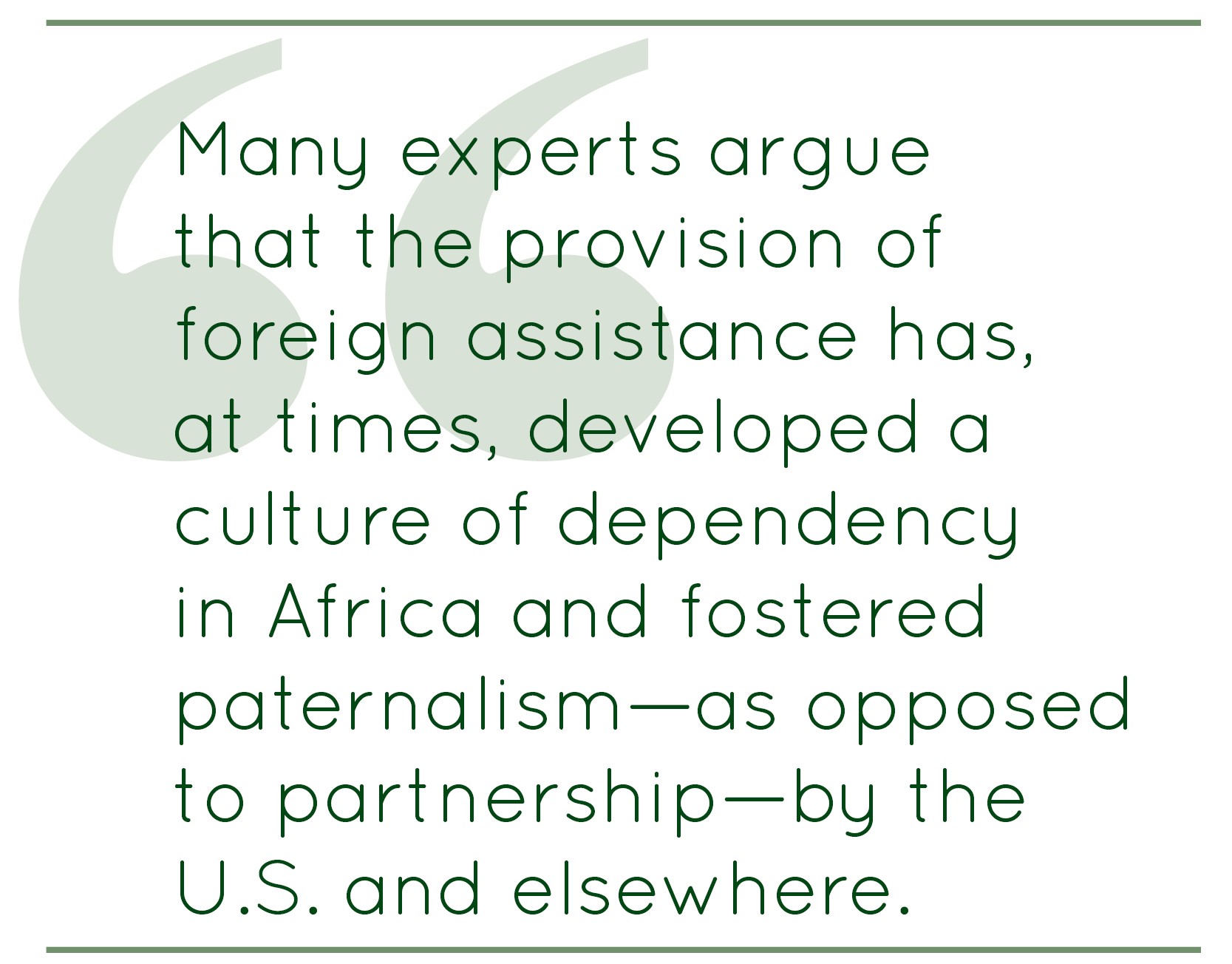 Thus, African governments need to take this opportunity to scale up policies that spur democracy, creating the enabling environment to build prosperity in Africa through concrete priorities such as job creation, regional integration, and economic engagement.

Africa has the youngest population in the world, with 200 million aged between 15 and 24 (doubling by 2045 according to African Development Bank). Given that the continent will have a shortfall of 74 million jobs that need to be created by 2020, governments need to create policies and implementation plans that will allow for a more competitive private sector that favors business growth, job creation, and the stimulation of African economies—such as sound fiscal and monetary policies; good governance, transparency, and strengthened judiciary systems; an improved investment climate, and reduced corruption. In particular, long-term investment in the private sector, the infrastructure and manufacturing industries, and agriculture will address food insecurity and create the necessary employment opportunities for African youth. Boosting incentives to improve the quality of education will also be key to producing a skilled workforce.

Africa has the youngest population in the world, with 200 million aged between 15 and 24 (doubling by 2045 according to African Development Bank). Given that the continent will have a shortfall of 74 million jobs that need to be created by 2020, governments need to create policies and implementation plans that will allow for a more competitive private sector that favors business growth, job creation, and the stimulation of African economies—such as sound fiscal and monetary policies; good governance, transparency, and strengthened judiciary systems; an improved investment climate, and reduced corruption. In particular, long-term investment in the private sector, the infrastructure and manufacturing industries, and agriculture will address food insecurity and create the necessary employment opportunities for African youth. Boosting incentives to improve the quality of education will also be key to producing a skilled workforce.

In moving away from a reliance on Western assistance, African governments should seek to improve regional integration initiatives, which are key to sustaining development and encouraging long-term prosperity for the entire region. Increasing intra-African trade will be a key component to accelerating economic growth, as it will increase industry competition, improve productivity, and develop local infrastructure.

Africa’s Continental Free Trade Area (CFTA) will establish free trade among all 54 states on the continent by 2017 (though the region is behind its timeline) and a continental union by 2019. This will be a pivotal moment for development in Africa. The current level of trade between African states is only 12 percent compared to 60 percent for Europe, 40 percent for North America, and 30 percent for the Association of Southeast Asian Nations (ASEAN), according to the World Trade Organization (WTO). The CFTA, though, would establish the world’s largest single market and effectively boost trade between African states by 50 percent. When combined with good governance and political stability, intra-Africa trade and deepening market integration will significantly increase economic growth, job creation, employment, poverty reduction, inflow of foreign direct investment, industrial development, and better integration of the continent into the global economy. It will also decrease the continent’s current heavy reliance on the outside world for its growth.

The future of the African trade regime depends more on what Africa will negotiate and not on what Africa deserves, so leaders must actively seek commercial and trade engagement. The recent Trump administration trade report to Congress clearly reflects that the U.S. will unequivocally protect America first in future trade regimes.

Africa is not a U.S trade competitor, especially when it comes to claims of unfair practices that are costing American jobs. The African Growth and Opportunity Act (AGOA) has not stolen American jobs. It has actually created around 120,000 jobs in the U.S., and 350,000 direct and 1 million indirect jobs in Africa. Now, though, some experts speculate that the Trump administration will attempt to make U.S.-Africa trade agreements more reciprocal and envision negotiating bilateral agreements that parallel the Economic Partnership Agreements between African countries and the European Union to give American exports comparative advantages. Morocco already presents an example of a successful free trade agreement with the U.S. According to the International Trade Administration (ITA), average U.S. exports to Morocco have more than tripled since the U.S.-Morocco Free Trade Agreement (FTA): U.S. exports to Morocco increased from $482 million in 2005 to $2.1 billion in 2015. Morocco export goods totaled $977 million in 2013, a 119% increase since 2005.

Consequently, Morocco’s ambitious economic reforms positioned the kingdom as a gateway for U.S. companies to African and European markets, becoming the prime destination for foreign direct investment in Africa. Its successful completion the COP22 last year, its return to the African Union, and its massive investment in the continent (the second largest investor after South Africa) will bear even more dividends.

Then again, after U.S. trade negotiations with SACU and Egypt were suspended several years ago, the readiness of African countries to engage in these negotiations remains premature. Nevertheless, it is important that African nations prioritize greater dialogue between members of regional economic communities to implement necessary policies reform and with the U.S. in order to accelerate such reform and increase trade and investment between both continents. 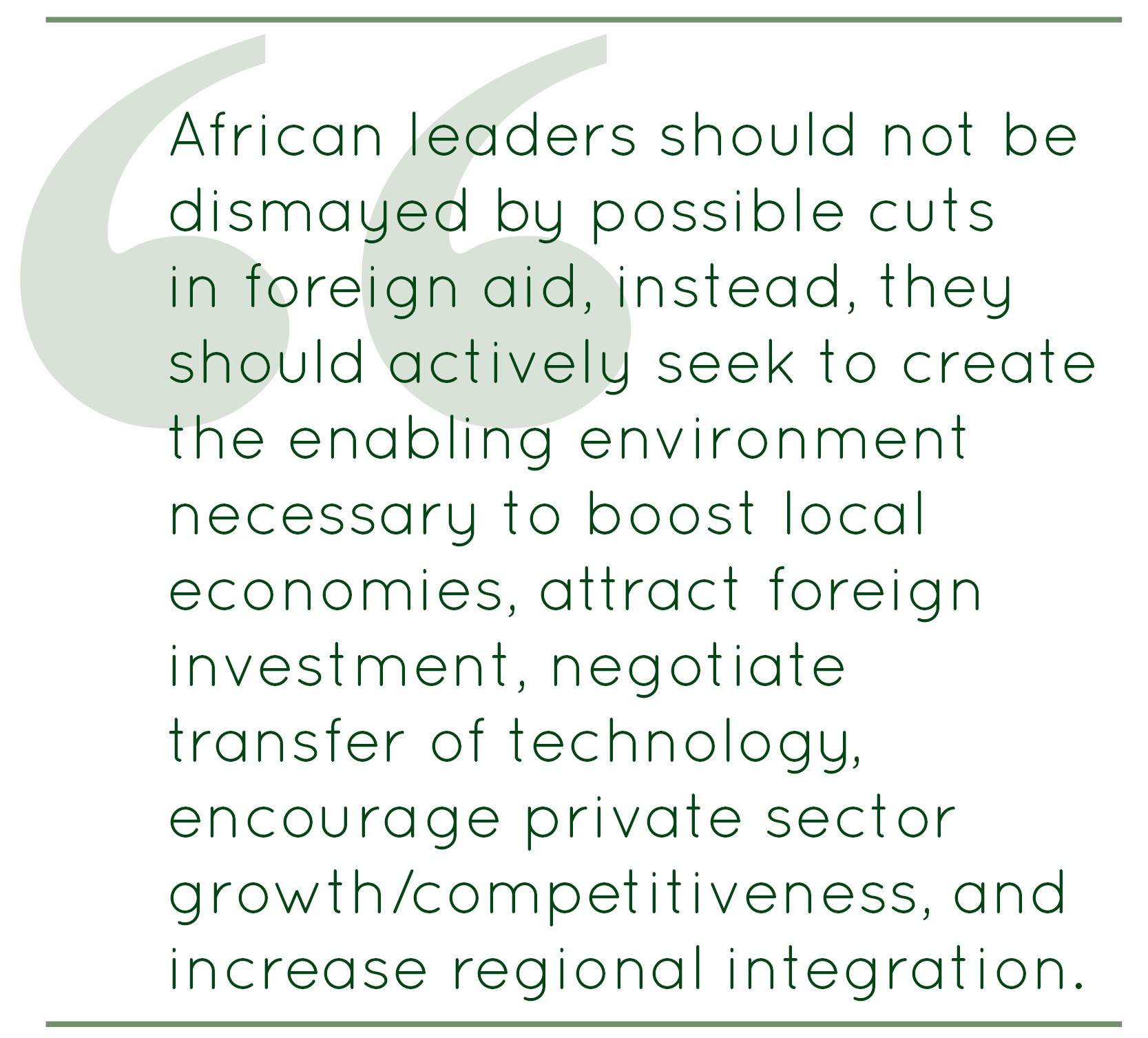 As outgoing Assistant Secretary for Africa Ambassador Linda Thomas-Greenfield emphasized, “The African continent has made enormous democratic and economic progress in recent years and now holds a growing place on the global stage.” African policymakers must work to continue this trend, largely through the promotion of African trade.

The Future of U.S.-Africa Engagement: Trade, Not Aid?

Though aid to Africa looks like it will get cut, it doesn’t mean that U.S. engagement will too. Trump must continue to engage Africa: The region is of paramount importance because of Western reliance on natural resources, trade, economic opportunities, and long-term security issues. In fact, American engagement in Africa largely serves American interests. For example, creating African jobs is not just important for economic growth; it affects national and global security. In particular, youth unemployment often serves as a powerful recruitment tool for insurgency and terrorist organizations.

Similarly, former President Obama’s Power Africa initiative aiming at addressing the much-needed power poverty in Africa created more jobs in the U.S. because of the opportunities given to U.S. companies. Additionally, the program will save American taxpayers $86 million over five years. The U.S. Trade and Development Agency (USTDA), whose budget is also in jeopardy, had increased its energy portfolio for feasibility studies by 800 percent, creating U.S. export avenue for energy companies. Encouraging a mutually beneficial pro-business approach that will create jobs in the U.S. and Africa could be a very successful strategy. Greater private sector engagement will boost local economies and reduce long-term dependency on aid. 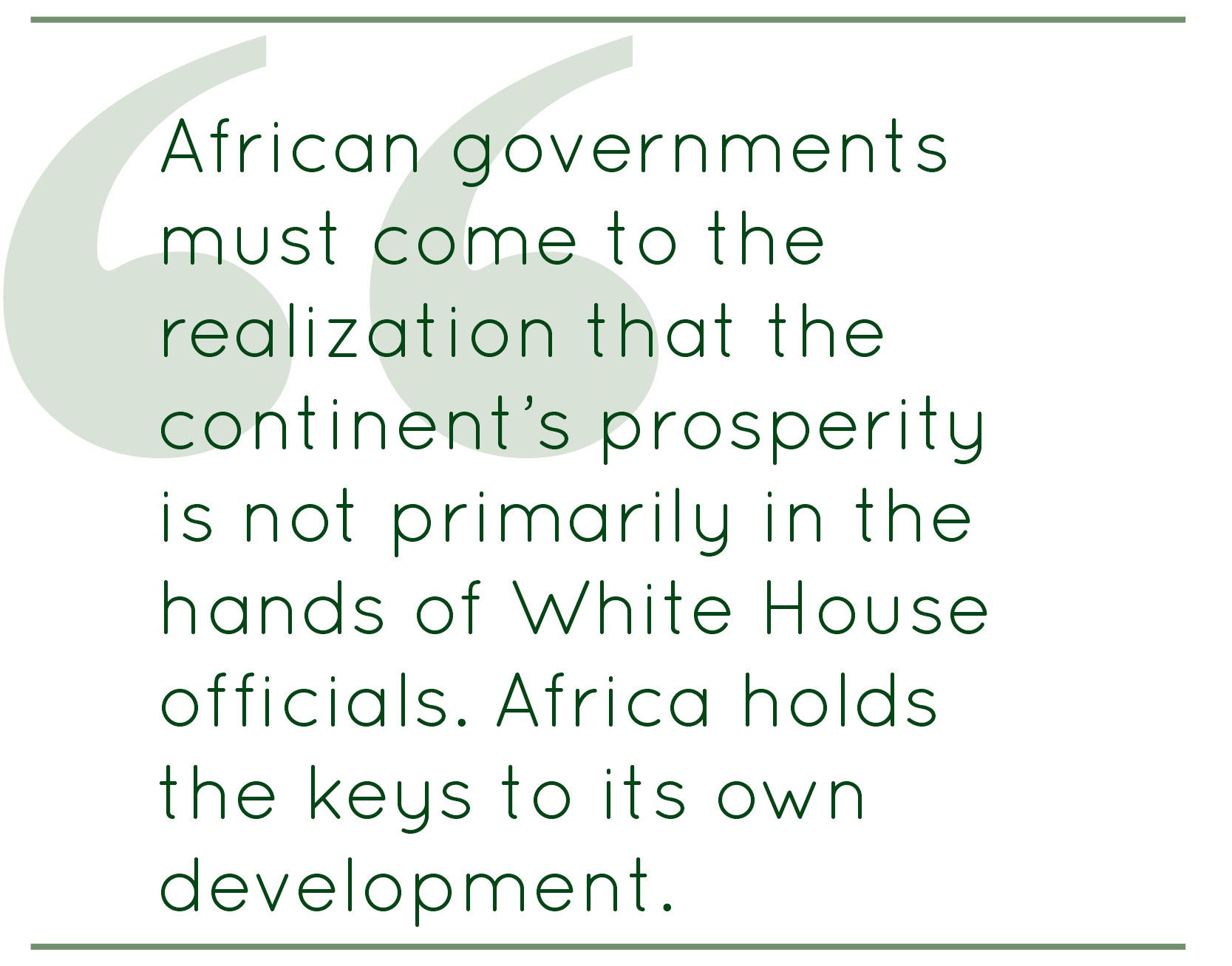 Trump continues to pursue policy that he believes would have the greatest return for the American people. In the same way, African leaders should not be dismayed by possible cuts in foreign aid, instead, they should actively seek to create the enabling environment necessary to boost local economies, attract foreign investment, negotiate transfer of technology, encourage private sectorgrowth/competitiveness, and increase regional integration.

Whether the Trump administration slashes the aid budget or not, African governments must come to the realization that the continent’s prosperity is not primarily in the hands of White House officials. Africa holds the keys to its own development. It is our hope that U.S.-African engagement will remain nonpartisan, strong, and continue to make mutually beneficial partnership more palpable. As Mandela said, “It is always impossible until it is done.”

Angelle B. Kwemo is the managing director for Africa at Washington Media Group and the founder of Believe in Africa. She is an author, consultant, international speakee, and philantropist. She is an internationally trained lawyer, with good understanding of the U.S. energy, agriculture, trade and foreign policies, as well emerging economies in Asia and Africa.