The Executive Board of the International Monetary Fund (IMF) on March 14, 2018, approved a new three-year arrangement under the Extended Credit Facility (ECF) for Burkina Faso for  US$157.6 million or 90 percent of Burkina Faso’s quota in support of the country’s economic and financial reform program. 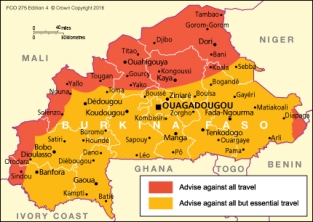 The program aims to achieve a sustainable balance of payments positions, inclusive growth, and poverty reduction by creating fiscal space for priority security, social and infrastructure investment spending. It is also aimed at helping to catalyze official and private financing and build resilience to future economic shocks.

The Executive Board’s decision will enable an immediate disbursement of SDR 18.06 million (about US$26.3 million). The remaining amounts will be phased over the duration of the program, subject to semi-annual reviews.

“Burkina Faso faces significant development challenges, which have intensified in the recent period due to security shocks and social unrest. The authorities are making strong efforts to improve security and meet the expectations of the population in the context of limited resources through the implementation of their national development strategy.

“The economic outlook is broadly favorable but also contains downside risks. Economic growth has accelerated and revenue collections have improved. The main risks to the outlook stem from security and domestic challenges.

“The authorities’ commitment to West African Economic and Monetary Union (WAEMU) convergence criteria concerning the overall fiscal deficit, revenue mobilization, the wage bill, and debt is welcome. The fiscal framework underpinning the new program, while ambitious, provides a credible path toward meeting the WAEMU convergence criterion for the overall fiscal deficit by 2019.

“The program is premised on the creation of fiscal space by increasing revenue mobilization through improved tax administration and new tax policy measures and by seeking to contain the public-sector wage bill. The budget also needs to be protected against the accumulation of contingent liabilities in the energy sector, including by setting a timeline for the implementation of the automatic pump fuel price adjustment mechanism.

“It is of the utmost important to improve the quality and efficiency of investments through prioritization and cost-benefit analysis for projects, including public-private partnerships (PPPs). There is also a need for strengthening the legal and institutional framework for public investment management and PPPs. The authorities’ decision to refrain from resorting to pre-financing arrangements in view of the fiscal risk such arrangements entail is welcome.”

Growth is estimated to have accelerated to 6.5 percent in 2017, from 5.9 percent in 2016, owing to higher agricultural output, particularly of cotton, increased mining activity, and a significant scaling up of public investment. Inflation remained subdued, with consumer prices rising by only 2 percent year-on-year in 2017. The current account widened as increases in exports of its stable commodities, gold and cotton, were outweighed by import demand that was buoyed by high levels of public investment, security spending, and increases in the public-sector wage bill.

GDP growth is expected to stabilize at 6 percent in 2018 and over the medium-term. Inflation should remain moderate, and the fiscal deficit is projected to converge to no more than 3 percent of GDP in 2019, consistent with the WAEMU convergence criterion. Key risks to the outlook relate to a further deterioration in the security environment and, on the external front, the price volatility of Burkina Faso’s major import and export commodities, namely oil, cotton and gold, as well as the vagaries of rainfall.

The new program aims to maintain macroeconomic stability while also creating fiscal space through enhanced domestic revenue mobilization and improved public spending. The program aims to bring the fiscal deficit to a sustainable level that is consistent with the country’s WAEMU commitments, while protecting critical spending on social services and priority public investments. Strengthened debt and public financial management, custom and tax administration reforms, and improved selection and analysis of large infrastructure projects, including public-private partnerships (PPPs), should underpin the authorities’ efforts to maximize the benefit of public spending while preserving macroeconomic and debt stability.