Singer and philanthropist, Rihanna, on Friday thrilled millions of fans in Senegal and throughout Africa by declaring the world should never stop fighting until every boy and every girl has access to education in developing countries. 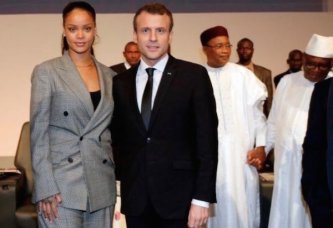 Rihanna and French President Emmanuel Macron featured the event in Senegal on Friday raising hundreds of millions of dollars for education in developing countries.

“This is a fight we’re never gonna stop fighting until every boy and every girl has access to education,” said the singer, an ambassador for the Global Partnership for Education, which supports work in 65 countries.

The GPE conference in Dakar on February 1 and 2, 2018 was the largest ever education financing event, with more than 10 heads of state, 100 ministers, and 1,200 participants. The event resulted in commitments of US$110 billion from developing countries and US$2.3 billion from donors.

Rihanna tweeted “merci” to thank Macron for co-hosting the organization’s conference as part of his two-day trip to Senegal. The host nation was praised for spending 7% of its GDP on education.

Macron called education “the only single response” to the extremism and fundamentalism threatening West Africa. He promised 200 million euros ($248 million) for the fund, sharply upping France’s earlier offer, and urged others to pitch in toward the 3.1 billion euro overall goal.

Macron hosted Rihanna at his presidential palace last year after she challenged him on Twitter to contribute to her efforts to fund education in developing countries, notably in conflict and crisis areas.