International Monetary Fund (IMF) Managing Director Christine Lagarde met the Deputy President of South Africa, Cyril Ramaphosa, on January 23, 2018, in Davos. They discussed recent developments and the outlook in South Africa. At the conclusion of the meeting, the Managing Director made the following statement: 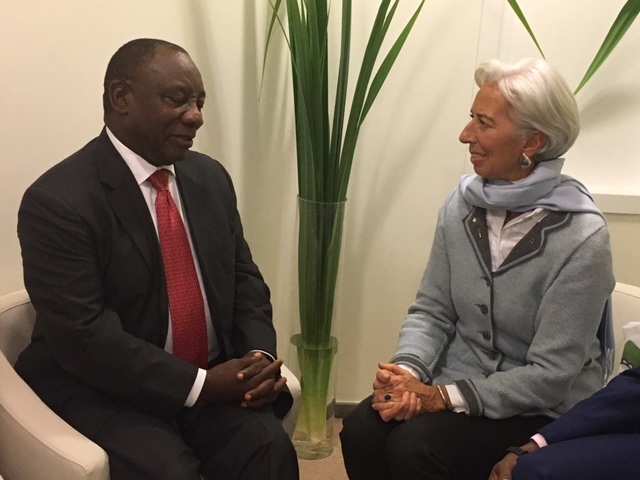 “I had a fruitful discussion with Deputy President Ramaphosa in Davos today. I congratulated him both on his election as President of the African National Congress (ANC) and on the nomination of Lesetja Kganyago, Governor of the South African Reserve Bank, as Chairman of the International Monetary and Financial Committee.

“We concurred that long-standing structural challenges continue to weigh on growth in South Africa. We consequently agreed that bold and timely reforms are needed to create an environment conducive to job creation and less inequality.

“Recent initiatives to improve governance and strengthen public institutions are steps in the right direction. These efforts need to be sustained and be complemented both by fiscal policies that stabilize debt at manageable and sustainable levels, and by the reestablishment of business confidence to make the economy more productive and competitive.

“The IMF will continue to work with the South African authorities and their technical teams as they advance their policy agenda.”

Like Loading...
‹ Investing in Better Migration Data Could be Worth Over USD 35 Billion
Egypt: Time to Entrench Growth and Make It More Inclusive ›