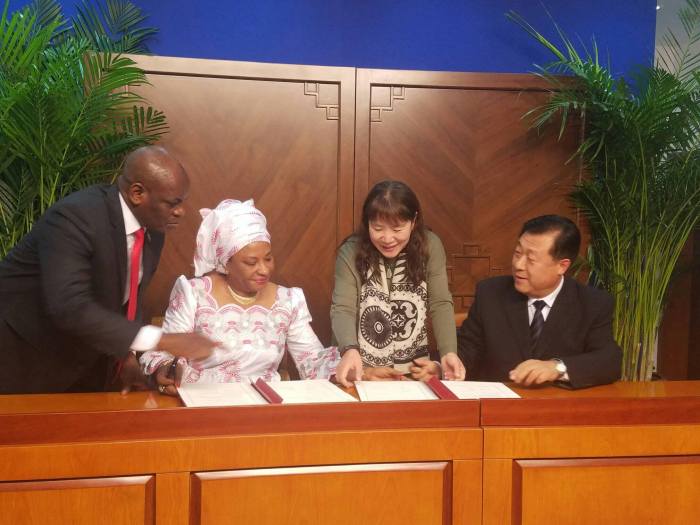 It seeks to ensure a long term friendly partnership in fisheries areas covering all possible fields to benefit both countries.

Speaking at the event in Beijing, Hon. Mans said, the MoU was as a result of the Chinese government’s realization that they are having problems with monitoring and control “of their long distance fleets as they have been involved in IUU fishing and not abiding to the regulations of their host country.”

Marine fish stocks, she said, “have been exploited by a variety of small-scale fishing units along with industrial trawlers for over 40 years.”

She was happy, therefore, that in a bid to control the country’s fisheries sector, the Chinese Government was putting in place measures that would sure their nationals meet a number of factors put in place.

The signing of the MoU, she said was an aspect of the framework that will initiate the entire process “through which the two countries will have mutual benefits.”

With the MoU, she was hopeful, more projects will follow and “the two countries will realize mutual benefits.”

She said, she was looking forward to a mutual partnership, with the MoU expected to help enhance the capacity of Sierra Leone’s fisheries.

She highlighted areas that would need support, including the need for fisheries harbor, addressing illegal, unreported and unregulated fishing, which requires resources in terms of trained manpower, new technological equipment and the development of Aquaculture with Technical Assistance in terms of staff and infrastructure, amongst others.

Minister Mans appreciated China’s support to Sierra Leone especially in infrastructure, health and human resource development, referring to the relationship between the two countries as one that “has come a long way.”

He commended the efforts of minister Mans in promoting collaboration in the fisheries sector between the two nations.

The MoU, he said further, was an important document at the level of inter-governmental cooperation between Sierra Leone and the People’s Republic of China.

Parties from both sides, he said, had made huge efforts in pushing the process leading to the signing ceremony.

The Chinese Government, he said, puts premium on fisheries cooperation with Sierra Leone for a number of reasons, with millions of dollars spent in deepening this cooperation thus helping in job creation.

He called on Chinese companies to abide by the laws of Sierra Leone and other international laws, take their social responsibilities seriously as well as contribute economically to the country.

Also attending the signing ceremony were officials from the Embassy, including Madam Kumba Momoh, Chargé d’Affaires.

Like Loading...
‹ Why Dr. Samura Kamara will get victory for APC
Sub-Saharan Africa: The Path to Recovery ›