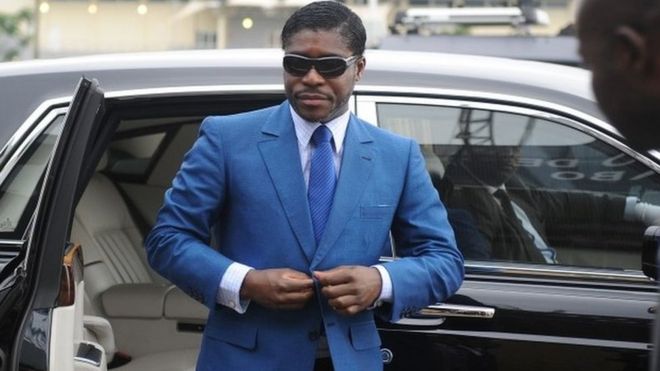 The 48-year-old, known for his lavish tastes, is the son of the oil-rich West African country’s president.

According to BBC, Obiang was absent from the trial, where he was found guilty of embezzlement. His assets in France will be seized, including a mansion on Avenue Foch in Paris. He also got a suspended fine of 30m euros (£27m; $35m).

The corruption trial of Teodoro Nguema Obiang Mangue, the son of the president of Equatorial Guinea, ended in Paris on 6 July with the prosecution calling for a three-year jail term, a €30 million (US$34 million) fine and the confiscation of assets. The Tribunal will return a verdict on 27 October.

The 48-year-old vice-president of Equatorial Guinea was not in court to hear the prosecution’s claim that he used money stolen from his country’s treasury and laundered through a shell company to fund a lavish lifestyle in France.

Brave witnesses for the prosecution testified knowing that the situation in Equatorial Guinea is tense for their families. Two witnesses are currently seeking political asylum in Spain and should be granted full protection.

The trial comes after a decade-long fight by Transparency International and Sherpa to win the right for civil society to present evidence. It required a change to French law and a crowdfunding campaign to ensure the case was heard.

The defence tried to argue that it was illegal for a French court to hear the case but the judge disagreed. The alleged money-laundering took place in France.

Obiang was accused of using stolen money to buy, among other things, a 20-room apartment worth an estimated €80 million (US$91 million) in Paris and a garage full of luxury cars.

This is not the first time Obiang has been indicted. In 2014, Obiang reached a settlement in the US on separate corruption charges. He was forced to sell a multi-million dollar mansion in Malibu, California and donate US$30 million to a charity to help people in Equatorial Guinea. This settlement attracted considerable global attention.

Like Loading...
‹ Dozens of new genetic regions linked to breast cancer
Misery in Slow Motion: The Deep and Long Lasting Effects of Drought ›