Home › Politics › Masire: the President Who Left Botswana and the World an Enduring Legacy

Masire: the President Who Left Botswana and the World an Enduring Legacy

In the Western press, the legacies of African leaders tend to hinge on their respect for term limits, property rights, and fiscal restraint. Since his death in June 2017, the late Quett Ketumile Masire, Botswana’s former Minister of Finance and Development Planning (1966-1980) and President (1980-1998), has been remembered largely in these terms.

A Washington Post obituary quoted former US President Bill Clinton, who in 1998 called Masire “an inspiration to all who cherish freedom.”

Even before Masire’s death, the literature on Botswana’s economic history was filled with praise for his leadership. A 1999 World Bank report hailed his government for its “fiscal discipline.” A Harvard Business School case study described Botswana under Masire as a stalwart of “prudent social and macroeconomic policies.”

All of this is quite true. But there is more to the story. Masire was also original and daring. While international financial institutions now praise his careful economic management, they often disagreed with his decisions and denied his requests. One of the most important (but little-mentioned) parts of Masire’s legacy was his commitment to invest in health and education programs even when the World Bank and International Monetary Fund (IMF) advised against it.

Careful planning and hard work were central to Masire’s identity. With both his parents dead by the time he was 21 years of age, it fell to Quett Masire, the eldest son, to look after his siblings. He admitted to being a tough disciplinarian as manager of the family farm. As Botswana’s Minister of Finance and, later, as President, he made fiscal prudence a central tenet of policy making. 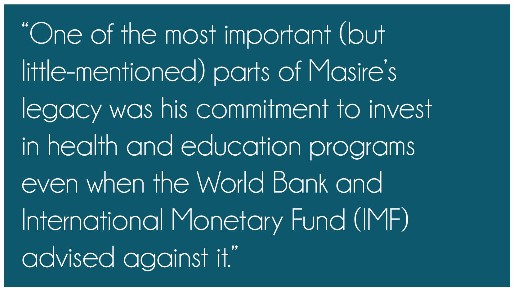 When diamond deposits were discovered shortly after Botwana’s independence in 1966, Masire insisted the government save a significant portion of its diamond revenues. He later wrote:

As farmers we have always known the importance of saving for a rainy day, or in our case for a dry day.

Development economists have applauded this practice, which allowed Botswana to escape the “resource curse” that has left many governments at the whim of volatile mineral prices.

But even the fiscally conservative Masire thought development institutions often took a too-narrow view of the determinants of growth. In the late 1960s, before Botswana was able to draw on mineral revenues to finance public spending, the new government sought foreign aid. When I interviewed Masire in November 2015, he recalled that while the World Bank would provide concessional loans for roads, bridges, power plants and factories, they would not finance health and education. Investments in social services, bank officials told Masire, could not provide a sufficient “rate of return.”

By the mid-1970s, World Bank President Robert McNamara and bilateral aid agencies showed greater enthusiasm for health and education. Breaking into a grin during our interview, Masire suggested that African leaders could claim some credit for this shift saying,

Botswana, though, did not wait for this about-face. By the 1970s the government was collecting diamond revenues and, less reliant on donors, it steadily expanded access to health and education.

The real test came in the early 1980s when demand for commodities (including diamonds) plunged and interest rates soared. The IMF demanded its developing country borrowers adopt fiscal austerity.

Masire remained committed to fiscal prudence, but he disagreed with the IMF’s one-size-fits-all approach. He was, he later wrote, “determined” to use his government’s hard-won savings so that “development efforts should proceed and not be seriously interrupted.”

During the global debt crisis of the early 1980s, when diamond sales fell, Masire demonstrated why he had saved so diligently. Though Botswana was still poor enough to be eligible for an IMF loan, Masire declined the offer, and instead used the nation’s own reserves to successfully weather the downturn. Thanks to the government’s continued spending on social services, health and education outcomes continued to improve. The literacy rate rose from 34% in 1981 to 86.5% in 2014.

While numerous studies have demonstrated an adverse impact on maternal and child health following IMF programs, Botswana’s independent course allowed it to achieve sub-Saharan Africa’s second-lowest under-5 mortality rate by 1990.

What led Masire to depart from the prescriptions of the World Bank and IMF? In addition to framing health and education as integral to economic growth, Masire told me he was deeply affected by the poverty he witnessed during his childhood saying,

Some people suffered from malnutrition…and other people were sick but could not go to hospitals because of their dire poverty…We felt that whatever we did, we must factor in social justice.

President Masire’s tenure was not without failure. He came to openly regret his administration’s delayed response to HIV and Aids. By the mid-2000s, Botswana had one of the world’s highest HIV prevalence rates. Botswana remains a nation with tremendous income inequality, and the San people of the Kalahari Desert have long complained of mistreatment by the government.

Despite these profound challenges, Masire should be remembered for his courage as well as his prudence. He was eager to hear advice from near and far, and he helped Botswana to blaze an independent path. Today, the nation he led is the better for it. Long before academic economists and epidemiologists detailed the adverse health outcomes of IMF austerity policies, Masire understood – and avoided – the deadly consequences of slashing social services. In doing so he left an inspiring example not only for Africa, but for the world.

Luke Messac is a dual-degree MD/PhD student at the University of Pennsylvania. He completed his PhD in the History and Sociology of Science in 2016, and he is currently in his final year of medical school. He has published articles in Social Science & Medicine, the South African Historical Journal, the Journal of Viral Hepatitis and the Journal of Policy History. He has also contributed chapters to edited volumes, including Reimagining Global Health: an Introduction (University of California Press, 2013), and Therapeutic Revolutions: Pharmaceuticals and Social Change in the Twentieth Century (University of Chicago Press, 2016).