NASA’s study has shown that biofuel produces fewer and smaller soot particles than standard jet fuel and would reduce aviation’s contribution to global warming in ways beyond the possible effect on contrails and cirrus clouds. 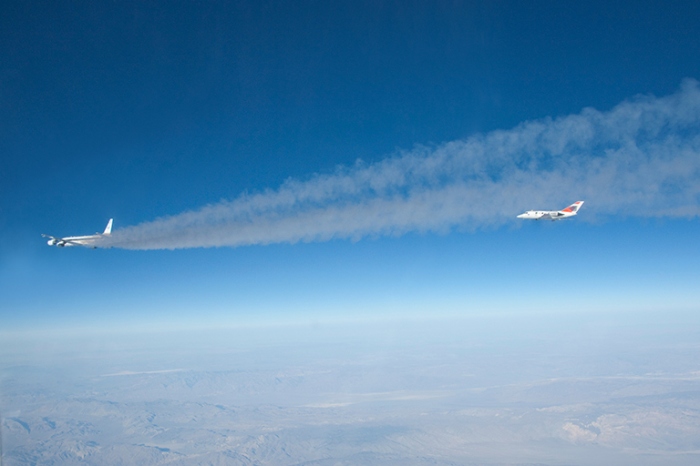 A research plane samples exhaust from NASA’s DC-8 to compare emissions from standard jet fuel with those from a biofuel blend.

According to to the report, tiny particles of black carbon (that is, soot) suspended in the atmosphere soak up the sun’s energy like a black sweater on a hot day and radiate the heat back into the atmosphere. So less soot, less warming.

Replacing fossil fuel with biofuel also reduces the amount of carbon dioxide that is added to the atmosphere. Growing plants absorb CO2 from the air. Burning the plants after they’ve been turned into biofuel simply returns that CO2 to the atmosphere—a wash, assuming that fossil fuels were not used in the growing, harvesting, transportation or processing of the biofuel plants.

In contrast, burning fossil fuel injects CO2into the atmosphere that would otherwise remain sequestered deep underground. So it increases the modern atmosphere’s concentration of the greenhouse gas, which warms the planet.

NASA plans further tests in cooperation with the German Aerospace Center to improve understanding of these processes.

In 2015, the ACCESS team took part in a German-sponsored study that, Anderson said, provided evidence that cutting down on soot reduces formation of ice crystals. And NASA plans to collaborate with the DLR still further.

“We hope to take the DC-8 to Germany in January 2018 and repeat some of the things that we did in ACCESS with a much better suite of instruments,” NASA scientist Bruce Anderson said.

“We’re going to do the experiments where conditions are a little more right for forming contrails (in air that is more humid),” NASA scientist Richard Moore said, “in a way that doing flights over Armstrong in the middle of the Mojave Desert is perhaps not.”

“We will get into situations where we have persistent contrails,” Anderson said. “We also plan to fly through the North Atlantic Flight Corridor and sample ice particles forming downwind (of flight paths) to see whether they have black carbon cores, which would verify that they are caused by aircraft emissions.”