Ahead of World Day to Combat Desertification and Drought, the African Development Bank (AfDB) announced that it would work with partners to accelerate the implementation of the Drought Resilience Sustainable Livelihood Support Programme (DRSLP) in the Horn of Africa. 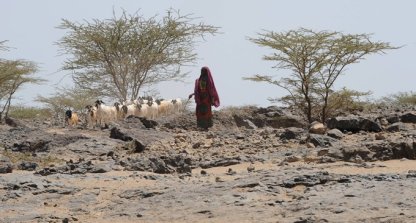 World Day to Combat Desertification and Drought is observed every year on June 17 and aims to promote public awareness of international efforts to combat desertification. The day is used to remind stakeholders that land degradation neutrality is achievable through problem-solving, strong community involvement and co-operation at all levels.

This year’s theme examines the important link between land degradation and migration. Among others, environmental degradation, food insecurity and poverty are causes of migration and development challenges.

The African Development Bank has several programmes in place in the Sahel and the Horn of Africa, and has provided emergency support to countries facing drought.

For instance, early this year, the AfDB signed a loan and a grant amounting of US $7.14 million to finance the fourth Drought Resilience and Sustainable Livelihoods Program in Eritrea.

DRSLP was to ensure that the necessary infrastructure to reduce and minimize the recurrent drought in the region are in place. Implementation of the DRSLP has faced initial start-up delays due to various factors

The Bank is launching, in close collaboration with the Intergovernmental Authority on Development (IGAD) secretariat, a mid-term review of the DRSLP to revisit the projects’ components and implementations modalities and put in place urgent and concrete measures to accelerate its implementation particularly in Somalia and Ethiopia.

Drought Resilience and Sustainable Livelihoods Program – Project II (DRSLP II) in the Horn of Africa is part of a multinational program that covers Eritrea, Ethiopia, Somalia and Sudan.

Indeed, the magnitude and severity of food insecurity resulting from extended droughts have reached unprecedented levels this year. 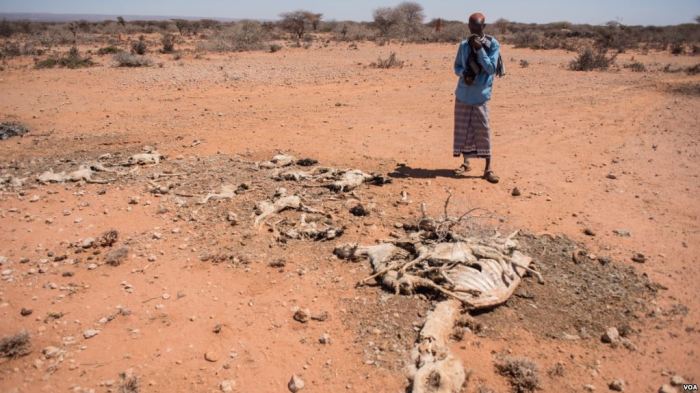 FILE – Mohamed Aden Guleid looks at one of his camels on which succumbed to drought in Somaliland region of Somalia, Feb. 9, 2017. (VOA/Jason Patinkin)

The world faces the largest humanitarian crisis since the end of the Second World War with more than 20 million people requiring humanitarian assistance.

The African Development Bank participated in a five-day mission to the Horn of Africa which concluded Tuesday, alongside representatives from the African Union, United Nations agencies, the USAID Office of Foreign Disaster Assistance and the World Bank.

In Ethiopia and Somalia, the delegation witnessed first-hand the dire situation facing millions of displaced people in the region.

As a result of prolonged drought and conflict, a large proportion of the population in the affected countries is in need of food assistance, as families face limited access to food and income, together with low cereal and seed stocks, and low milk and meat production.

Also, the Horn of Africa region – comprising Somalia, Ethiopia, Kenya, Sudan, South Sudan, Eritrea, and Uganda – is one of the most climate-hazard prone and food insecure regions of the world. Beyond land and water resources, the region is facing complex challenges in managing its environmental and renewable natural resources – forests, fish, and the ecosystems on which they depend – in a sustainable way.

Forest reserves are diminishing due to use for heating and cooking in poor households resulting in soil erosion, and damages to grazing habitat for livestock is on the increase. In addition, while charcoal is a traditional source of energy and fuel, demand for this energy source drastically affects forest reserves and further reduces rainfall exacerbating aridity.

The socioeconomic impacts of displacement and forced migration due to drought and environmental pressures are significant. Refugee and displaced populations pose significant pressure on weak local and national institutions and strain national and local governments and host communities.

The African Development Bank is committed to working with the international community to improve the living conditions of Africans who are displaced due to extreme climate conditions.

“The Bank has committed $24 billion towards agriculture in the next 10 years, with a sharp focus on food self-sufficiency and agricultural industrialization,” AfDB President Akinwumi Adesina said recently. “The recent drought and famine facing some countries (South Sudan, Somalia, Nigeria, Kenya, Ethiopia and Uganda) deserve swift action, as 20 million face food insecurity and severe malnutrition. The Bank is taking action and is planning to deploy $1.1 billion, following Board approval, to address the crisis and ensure that drought does not lead to famine.”

Like Loading...
‹ United Nations agencies call for better management of land
Zambia slides towards authoritarianism as IMF props up government ›