The International Criminal Court (ICC) and the Argentine Republic have concluded an agreement on the enforcement of sentences. 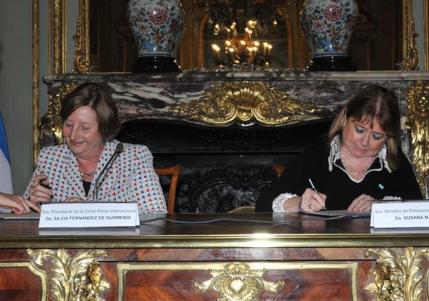 Under the agreement, persons convicted by the ICC may serve their sentences of imprisonment in Argentina if so decided by the Court and accepted by Argentina.

On 18 April 2017, Judge Silvia Fernández de Gurmendi, President of the Court, and H.E. Susana Malcorra, Minister of Foreign Affairs and Worship of the Argentine Republic, signed the agreement at a ceremony held in Buenos Aires (Argentina).

“The signature of this agreement is timely, as enforcement of sentences is no longer a distant prospect, but an immediate necessity resulting from the increased judicial activity of the ICC”, President Fernández stated.

She further recalled that the Court has no prisons of its own and that the Rome Statute, the founding treaty of the ICC, provides that sentences shall be served in a State willing to accept convicted persons.

President Fernández welcomed Argentina’s continued support to the ICC and expressed her hope that more States Parties will conclude agreements with the Court in order to share the responsibility.

“At a moment when justice and certain principles are being called into question in some places, Argentina once again shows its commitment. We will continue strengthening this commitment and we will continue working together with the ICC” stated H.E. Susana Malcorra.

Similar agreements on the enforcement of sentences are currently in force between the ICC and the governments of Austria, Belgium, Denmark, Finland, Mali, Norway, Serbia and the United Kingdom of Great Britain and Northern Ireland.