His Excellency President Dr. Ernest Bai Koroma today welcomes Her Royal Highness Princess Anne Elizabeth Alice Louise of the United Kingdom (UK) and her delegation during a courtesy call on him at State House in Freetown.

Princess Anne (The Princess Royal) is in the country on a two-day working visit to explore possible areas of further cooperation between the two countries. 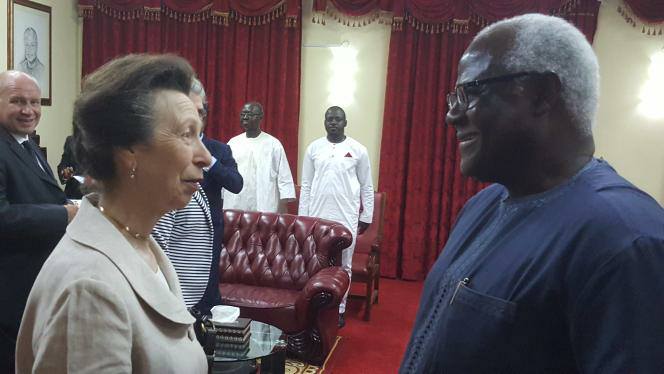 President Koroma said relations between Sierra Leone and the UK go beyond Independence, citing UK government’s support towards the fight against the deadly Ebola epidemic, ongoing support to the President’s Recovery Priorities and recent funding to the biometric voter registration exercise.

The President said that although the Ebola outbreak came as a shock, the collaboration with development partners, including UK’s Department for International Development (DFID), helped the country to acquire the required skills to defeat the virus and prepare for future outbreaks. In all of this, President Koroma pointed out, his nationwide social mobilization drive for community ownership of the fight against Ebola turned out to be the game changer in stopping the chain of transmission of the disease.

During her stay in the country, Princess Anne is expected to meet with several cabinet ministers and other state dignitaries. Before she departs the shores of Freetown on Friday 7 April, 2017, a reception will be hosted in the Ballroom at State House by His Excellency the President in honour of The Princess Royal.

Editor’s note: Queen Elizabeth II declared Sierra Leone a commonwealth country. The Afro-European colony was founded by a British organization for freed American slaves on March 11, 1792. There were about 1,192 African Americans who were relocated from Nova Scotia to Sierra Leone following the American Revolutionary War. The residents, including women, voted that year for the first time in elections for their officers. The people named this city Freetown.