Adesina and his team held meetings with Senior Government Officials and private sector executives on how to scale up cooperation and economic engagements between the three sides.

The delegation also met with the African Diplomatic Corps in India and participated in interactive sessions with Indian business leaders, which identified business opportunities in Africa, especially in infrastructure, energy and agriculture. 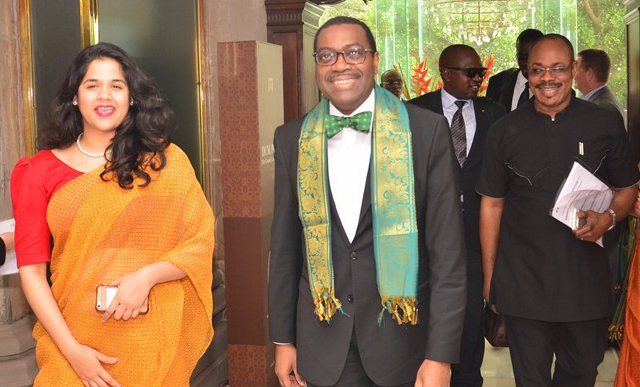 “India’s experiences are very relevant for Africa’s development,” President Adesina said during a meeting with Finance Minister Arun Jaitley and senior staff of the Ministry in Delhi.

He suggested the strengthening of cooperation between India and Africa at governmental, business and institutional levels should be similar to the type of cooperation existing between the AfDB and the Export-Import Bank of India.

This type of multi-level cooperation would benefit many Indian companies that want to do business in Africa, he said.

Adesina informed the Minister about the AfDB’s determination to establish an African Investment Forum and invited India to participate.

The visit has set the stage for improved cooperation between the Bank and India, as well as India’s relations with Africa in general.

The team met with the Chief Minister of Gujarat State, Vijay Rupani, who confirmed that preparations for the Bank Group’s landmark annual even were very much on track.

Furthermore, the AfDB and Exim Bank of India agreed to explore opportunities for project co-financing in Africa in sectors such as power, agriculture and irrigation.

Adesina and his delegation flew to Ahmedabad, in India’s western state of Gujarat, where they inspected infrastructure and preparations underway at the Mahatma Gandhi Conference and Exhibition Centre, which is hosting the Bank’s 2017 Annual Meetings from May 22-26.

Adesina left Ahmedabad, India, early on Monday at the end of the four-day official visit to India.