Shandong Iron and Steel Group has paid surface rent of one billion leones to land owners in chiefdoms in the northern districts of Bombali, Tonkolili and Port Loko.

Anthony Navo (Jnr): said Company will continue to work within the legal provisions and with the community people.

Head of Cooperate Affairs and Government and Community Relations, Anthony Navo (Jnr), said Company will continue to work within the legal provisions and with the community people.

Land owner, Alhaji Kamara, said the company is doing so much in terms of meeting its Cooperate Social Responsibility, but that effort is being undermined by the stealing of the rail clips by community people who sell them as scrap metals.

Following the payments of the surface rent, the people and Paramount Chief of Diyang 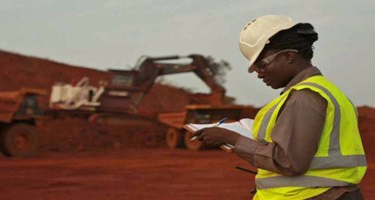 Chiefdom applauded the move of the Company, while urging them to explore his land which he said has more iron ore deposit than all the other areas being explored.

The director of the Environment Protection Agency Northern province, Bintu Kelfala, said payment of the surface rent is in line with the law. She said they have been assessing the activities of mining companies, but Shandong has always been in full compliance with the law.

In 2016, the Vice Chairman of China Iron and Steel Association, Hou Jun said USD$ 700 million will be utilized for the construction of processing plants as a further expansion of the Shandong Iron and Steel project in Sierra Leone.

Like Loading...
‹ Stakes for South Africa’s democracy are high as Zuma plunges the knife
Revival of the PDP is in the true national interest ›