Has Ebola returned to Sierra Leone?

On a sunny afternoon, the village hunter returns from the Gola Forest with his catch strapped loosely to his back; visibly sick and walking lazily to his thatch-roofed house. Suddenly, his family- wife, children and relatives- as well as neighbours come out to receive him, and the hunter collapses into their arms. 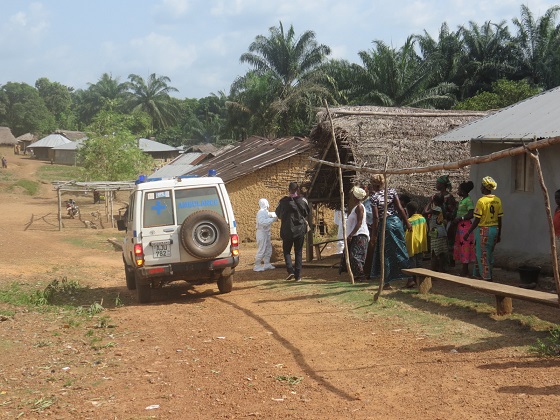 An ambulance with wailing siren screeches to a halt, scaring the villagers some distance away

Despite some care at home, the hunter’s case worsens. So the family decides to take him to the village herbalist for further treatment.

Moments later the hunter dies, and family members start to fall ill. Cries and wails fill the hot-burning atmosphere as the villagers, gripped with panic, lament the calamity that has befallen them.

Finally, somebody calls the health emergency line 117 for help, but little help comes a little too late. Mobile network connection is on-and-off in this area. It happens that there is only one health official at the Peripheral Health Unit (PHU) and he’s overwhelmed with other patients. The PHU is about 200 meters from the center of the village; you have to cross a bridge and walk a bit to get there.

An ambulance with wailing siren screeches to a halt. Three health officials dressed in PPE suits disembark, scaring the villagers some distance away. They walk purposefully into the herbalist’s hut, apply disinfectant all over the room and carefully cart the hunter’s body into the waiting ambulance. They speed off, with the villagers running and shouting after the vehicle.

This beckons the question: Has Ebola returned to Sierra Leone?

The answer is no, not for now. The events just described were not real but part of a ‘Simulation Exercise for Community Based Ebola Response’, involving about 25 local actors all performing various roles and the community of Mano-Jeigbla as participants.

A simulation exercise is an interactive drama event that involves people as active participants rather than a mere audience, framing and placing them in a certain scenario and inviting them to act and behave as if the situation was real. The objective of this simulation exercise was to test the emergency response protocol of the DHMT in practice and the level of awareness and preparedness in the community two years after the Ebola outbreak. Would the various stakeholders – health professional as well as the community leaders – remember and assume their roles and responsibilities to take rapid action if Ebola (or any other infectious disease) were to return to the community?

“We want to test the people’s knowledge about Ebola; whether they remembered what happened and what to do if it happens again,” said Augustine Brima, a field staff of SEND Sierra Leone who was among the advance team to prepare the community for the exercise.

Mano-Jeigbla village provides the perfect scene for the Ebola response simulation exercise. Located about 40 miles from Kenema town and a walking distance from the Liberian border, Mano-Jeigbla has a population of about 1,287 with 225 houses, most of them mud buildings with thatch-roofs. It is one of 12 villages in Tunkia Chiefdom with a total catchment population of 5,482. (Population and housing statistics from EDC Unit, PHU, Tunkia Chiefdom).

“The human traffic here is high,” said the Town Chief, Saffa Allieu Kallon. “People come and go from the Liberian border and travel to Kenema and other areas.” As the simulation exercise goes on, commercial motorbikes ply the route to and from the border transporting people.

On the second day of the simulation exercise, 22nd February 2017, the whole community gathered at the village center to review the exercise and proffer recommendations.

Meanwhile, if it were real the families quarantined would have been held for 21 days and might have suffered some form of stigmatization on their release. After the exercise, the villagers went about laughing as they recounted their experiences, but also emphasized that being part of such an exercise had enabled them to reflect and remember better.

Also present were officials from the implementing partners, the DHMT and the World Health Organisation to discuss what the simulation exercise had revealed in terms of gaps and challenges in the communities’ and health system’s ability to respond, share information, coordinate and work together during a health emergency situation. The villagers, as well as the officials, highlighted gaps in the exercise and proffered recommendations.

“The success of the exercise does not depend on whether the community is perfect in their response to the mock outbreak. It’s about really getting them to do their own thing naturally and together we identify the gaps and plan how to address them,” said Mathilde Gronborg Helms, WHH’s Head of Projects responsible for monitoring the project, adding that the simulation exercise had proved to be a very interesting tool to raise awareness about Ebola and other diseases, and learning easily how to respond to the situation, and putting in place response mechanisms that work well on the ground.

As such, the exercise served as a reminder of the need for sustained community based surveillance and strengthening of health monitoring and reporting, to promote resilience of the health system to prevent any future epidemic.

“We are not saying that Ebola will return,” said Josephine Jenneh Saidu, District Health Sister at the DHMT in Kenema. “We just want to be prepared, especially as we are now having cases of Lassa Fever, which has similar symptoms to Ebola. That is why the awareness raising should be sustained.”

Awareness and capacity gaps were observed during the simulation exercise and highlighted during the meeting, including the touching of a sick person; taking the sick to a herbalist instead of the health center or alerting CHWs; eating of bush meat and lack of proper hand-washing practices. The villagers further lamented the fact that the only PHU in the chiefdom is grossly understaffed and that the vigilance of CHWs is declining due to lack of support. Furthermore, lack of access to clean drinking water and toilet facilities is a huge challenge for general health and well-being and could as well accelerate the spread of communicable diseases. The community depends on a nearby stream and a well for water. Only few of the 225 houses have toilets, while the rest use the nearby forest as their rest-room.

“The challenges with the systems will always be there,” said SEND Sierra Leone’s Country Director Joseph Ayamga in an address to the community. “That is why when we work with community people it is their mindset that we challenge. If you don’t have toilets and water wells for example, we challenge you to dig them yourselves like the mud houses you built.  It is about what you can do to help yourself before help comes. It is that same mindset you will approach every challenge, including disease prevention.”