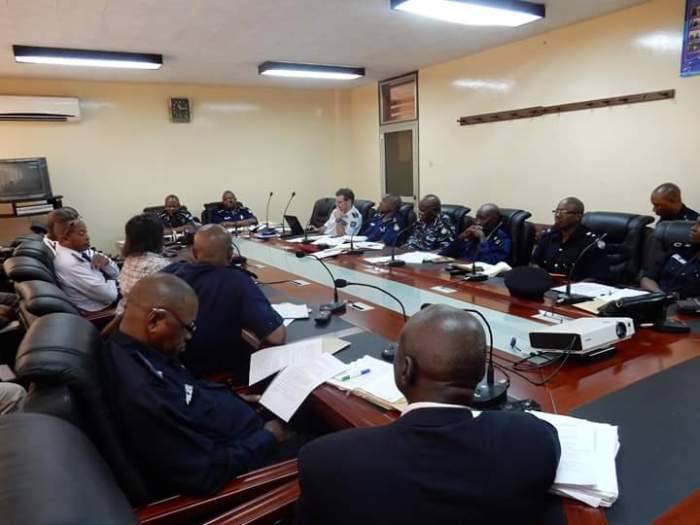 The meeting was geared towards cementing collaboration between the two institutions on the monitoring activities of police cells and the high number of complaints received by HRCSL against the SLP.

Addressing the Police EMB, the Director of Monitoring and Research, HRCSL, Josephine Thompson-Shaw reminded the SLP of their constitutional duties and also the mandate of the Human Rights Commission of Sierra Leone. She said that part of their mandate was to monitor places of detention which report are published in the Annual State of Human Rights Report (SOHR). The Director stated that it was a concern to the Commission to have received in the last SOHR 2014 the third highest number of complaints against officers of the SLP.

The Deputy Director of Monitoring and Research HRCSL- Richard T. Mbayoh reiterated HRCSL’s willingness to teach human rights modules at the Police International Law Enforcement Academy that was launched on March 5, 2015. Also, Jotham Johnson from the Complaints Registry of HRCSL commended the IGP for his prompt response to letters from the Commission that deals with complaints against his officers. He however called on the IGP to ensure that strategic personnel attend HRCSL’s referral meetings on a quarterly basis.

The Inspector General of Police, Francis Munu stressed that the police was sometimes at variance with the functions of the Commission as he stated that they look at both rights and responsibilities. He thus maintained that the SLP uses the human rights policing as a key to their activities. “We will be more than happy to be monitored. When you bring situations to us from an independent opinion which is good for us, you are always welcomed to monitor our cells” the IG stated.

The IGP spoke that the SLP was constrained in terms of funding which affects their operations as well as practical difficulties in the areas of arresting suspects in rural areas, and the non availability of Family Support Units in all divisions. He quickly stated that it was the right of people to demonstrate but it was also the right of people not to interfere in to the rights of others.

The Deputy Inspector General of Police, Richard Moigbeh lauded the initiative of HRCSL for the partnership and hastened to inform that the SLP was putting together human rights manual derived from the Commonwealth human rights manual. He however expressed his dissatisfaction that the HRCSL was not being fair to the SLP as he put it “you treat us with total disregard when it comes to human rights. We have not seen you raising concerns about us but you always agitate for the suspects in the cells and not those that work in the filthy cells. We do not provide the cells, somebody else is responsible. When we take part in crime and public disorder, police officers are killed by the civilians; you don’t bother to investigate the death of the police officer”.

Like Loading...
‹ Facebook deepens Nigerian partnerships at Social Media Week in Lagos
Kenya Airways presented with International Safety Award for protecting its employees from the risk of injury and ill health at work   ›