Sierra Leone — President Dr Ernest Bai Koroma in a social interaction dinner at the residence of Sierra Leone’s Ambassdor to Ethiopia and Permanent Representative to the African Union and the United Nations Economic Commission for Africa, Osman Keh Kamara, gave a message of hope to the Sierra Leone community in Ethiopia that Sierra Leone will definitely rise again. 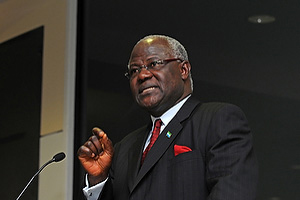 Addressing the Sierra Leone community, he thanked them for their contribution towards the fight against Ebola. He noted that the country now has the capacity to fight the virus pointing out that the recent case in Tonkolili has been isolated. President Koroma described the development as expected but however assured that government is on top of the situation. He also informed that government is rolling out a recovery programme that is focused on strengthening the health care delivery system, education, social protection, rebuilding the economy as well as accelerate private sector development.

The president explained that the 24 months recovery plan will improve on the 6-9 months programme that will specifically focus on increased access to water and energy across the country. The focus, he said, is to bring the country back on its feet and work on social delivery systems.

President Koroma told the gathering that the Ebola outbreak brought the country together and urged all to replicate similar efforts and strides in the county’s development aspirations. “We have come to know that any project that is owned by the local people, will definitely succeed,” the president also encouraged Sierra Leoneans to come together in transforming the country into middle income status by 2035.

With airlines resuming operations and restarting development programmes and activities across the country, the president confidently expressed the conviction that Sierra Leone will rise again.

Welcoming the president, Ambassador Osman Keh Kamara praised President Koroma for effectively steering the ship of state throughout the turbulent Ebola outbreak to calm waters. He expressed confidence that with the virus almost defeated, government will continue to engage communities and resume the development and transformation of Sierra Leone.