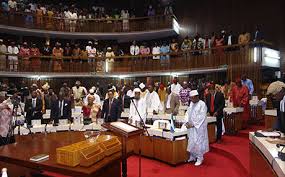 Making his submission on a “motion of thanks” to the President, Hon. Dauda Kallon based his contribution on the role of the Ministry of Foreign Affairs, noting that Parliament and the Ministry have often collaborated for the development of the nation.

Hon. Aron Koroma, described President Koroma as a transformational leader, who has made agriculture the center stage of development, whilst championing transparency and accountability for good governance. For Hon. Patrick Foyah, the President’s leadership style was evident in the outbreak of the Ebola virus. He also commended colleague MPs for engaging in the fight against the virus. In his contribution to the debate, the Chairman of Sports Committee, Hon. Hassan Sesay, highlighted the importance of transparency and accountability in Sports.

The chairman for the Legislative Committee, Hon. Ajibola Manley-Spain, thanked the Members of Parliament for enhancing the effectiveness of the Executive by approving and ratifying projects for the country, whilst Hon. Emma Kowa underscored the continuity of Government. Basing her contribution on the social aspects of life, she appreciated the work of the President but urged the House to recognize the legacies of the former government.  Hon. Alhassan Kamara commended President koroma for empowering the youth, noting that the Government’s development priorities cut across all regions.

In the first round-up of the debate, the Deputy Minority Leader, Hon. Ansu Kai- Kai, commended the good work of Government in certain sectors and recognized the role of both the Executive and Parliament in the fight against Ebola. He called on Government to provide resources for Parliament in order to monitor MDAs’ activities.

Concluding the debate, Leader of the House Hon. Ibrahim Bundu, titled his   contribution “Stop Complaining and Start Competing.” He referred to recent Acts of Parliament such as “Small and Medium Enterprises Act” and “Local Content Act,” both of 2015, which he said empower Sierra Leoneans to get into businesses and improve their lot. He appreciated the work of the Executive in the development of the country and called on the youth to eschew violence. Hon. Bundu also urged the Ministry of Finance to capacitate Parliament for her oversight functions as she carries out her constitutional mandate to oversee MDAs and stop leakages.

In the three days of debate, several many MPs made salient contributions on both the achievements and challenges of the President. These were amply highlighted by the Chief Whip, the proposer of the motion as lessons learnt.