Sierra Leone –The newly appointed Attorney General and Minister of Justice Joseph Fitzgerald Kamara Tuesday 5 January 2016 subscribed to the oath of office at a ceremony at State House, Freetown. Prior to his appointment as Attorney General, Mr. Kamara was czar of the country’s Anti-corruption Commission (ACC) and has helped to heighten the country’s profile in the fight against corruption. 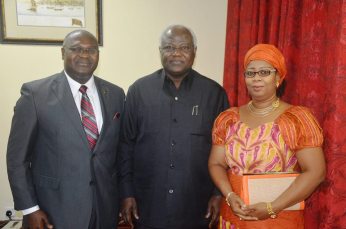 Congratulating the appointee, President Dr Ernest Bai Koroma said Joseph Fitzgerald Kamara is familiar with his new assignment because of his long standing experience as legal practitioner. He furthered that a lot is expected from the appointee, adding that with Mr. Kamara’s performance at the ACC, he was optimistic he would live up to the expectations of Sierra Leoneans.

Joseph Fitzgerald Kamara thanked President Koroma for the appointment and the confidence reposed in him. He made firm commitment to live up to expectations in discharging his duties as Attorney General and Minister of Justice and assured the dispensation of justice for all.