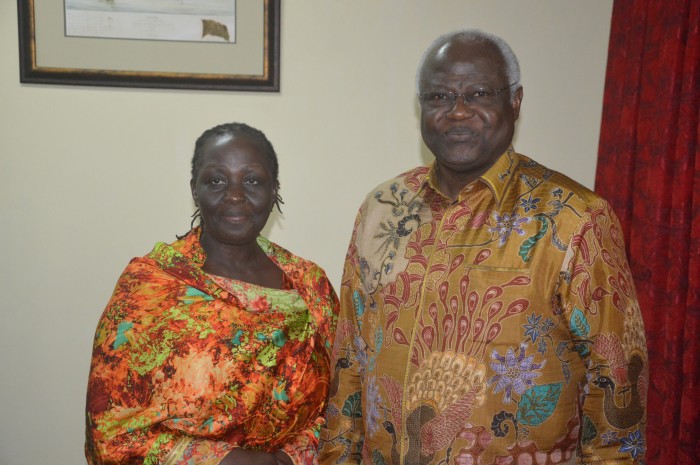 Dr. Wandira-Kazibwe, Champion of AIDS, was invited by the Ministry of Health and Sanitation in collaboration with the National AIDS Commission, to join the country in commemoration of World AIDS Day.

President Koroma thanked Dr. Wandira-Kazibwe for accepting an invite from Sierra Leone to join the commemoration of World AIDS Day, while describing 2015 as a critical period for the country, as it ends with the folding up of the Millennium Development Goals and the inception of the Sustainable Development Goals (SDGs).

“We have to ensure that we move forward with lessons learnt from the Ebola outbreak. We have learnt a lot from Ebola and a lot more needs to be done,” he said, noting that Sierra Leone has woken up to the challenges by strengthening the health sector to provide an efficient health service delivery system.

The president disclosed that government will continue to engage development partners as there are still basic issues to be addressed, and assured that Sierra Leone will definitely come out stronger.

Conveying courtesies from President Yoweri Museveni of Uganda, Dr. Wandira-Kazibwe, pledged further support to Sierra Leone in the fight against HIV/AIDS and lauded government’s efforts for winning the war against the Ebola virus disease.

The former Ugandan Vice President described Sierra Leone as a home, while referring to Sierra Leoneans as warm and kind people. She recalled that Ugandans fought war, HIV/AIDS and then Ebola, but successfully won those battles, noting that the viral outbreak in Sierra Leone was similar to what Uganda had many years ago.

Dr. Wandira-Kazibwe expressed delight at continuing efforts by government and partners in restructuring the country’s health sector with policy reforms which she said are in sync with the SDGs. She encouraged government to continue to prioritize the prevention of HIV/AIDS at all levels. She also commended President Koroma for providing strong leadership in the Ministry of Health and Sanitation.

Like Loading...
‹ 50 Most Influential Industry Leaders Featured on the 2016 Mining Indaba™ Speaker Line-Up
WHO’s first ever global estimates of foodborne diseases find children under 5 account for almost one third of deaths ›