Regionalism will not break SLPP

Disgruntled members of the Sierra Leone Peoples party have intimated Specimen that they will not allow the actions of an individual to break their party. 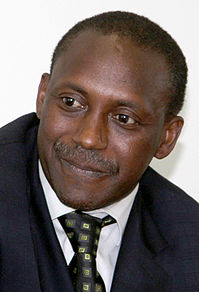 “SLPP is not own by an individual or few individuals,” said Alieu Musa who claimed to be a member of the party.

Just recently, supporters of aspiring contender for the flag bearer of the SLPP, Dr. KandekKolehYumkela and opposing members of the same party clashed at the party headquarters.

And although the party headquarters has made public the positive handling of the situation and addressing Dr. Yumkela’s membership status, some party members are still regarding Dr. Yumkela as an alien who, they claimed, is barging into the party without going through the party protocols.

“SLPP is not a garage,” Dominique Sesay said to SPECIMEN.

“We will not listen to any of their utterances. SLPP is not an individual party or own by few people,” said Adiatu Koroma, a teacher and residents of Kissy Mess Mess.

She said the party is yet to address the many ills affecting the party and only busy painting the surface while internally there are many challenges.

“SLPP is being threatened by a South and North divide and falsehood relationship amongst the membership,” she said.

Koroma said there are people in the party with the intention to bring unity and development but that others are not seeing it that way.

She also claimed that lawyer Alpha Timbo, John O. Benjamin and few others have always worked in the best interest of the party and the membership but are being frustrated by some of the members who have greater influence amongst party supporters.

The issue for the flag bearer of the SLPP is a contentious one and for some SLPP members, Dr. Yumkela is just the new kid on the block and that there are others who will be hard nuts to crack by the former flag bearer, Rtd. Breg. Julius Maada Bio.

“We are not against any member wanting to lead the SLPP but what we are against is for people to think they can use our party as a retirement ground,” said Dominique Sesay.

He also said that the issue about South and North divide isn’t a valid reason by critics to right off the SLPP and that they will come out with a formidable team to beat the APC and once again build Sierra Leone.