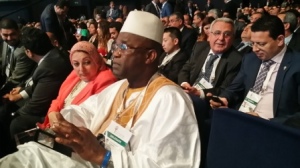 President Dr. Ernest Bai Koroma was invited by his Egyptian counterpart, President Abdel Fattah El Sissi, but was unavoidably absent. He was represented by Alhaji Mohamed Sillah Kargbo, Sierra Leone’s Ambassador to the Kingdom of Saudi Arabia and accredited to Egypt.

The aim of the three days conference which ended on 15th March, according to Naglaa Al Ahwany, Egypt’s International Cooperation Minister, was to present the Egyptian government’s economic vision, present investment opportunities in a variety of sectors, and propose specific projects.

The Minister who led the organisation of the Investment Conference in partnership with members of the Ministerial Economic Committee earlier told over 2,000 delegates that the event will see the launch of a four-year development and investment program that will put their economy on a path towards inclusive and sustainable growth.

Speaking to reporters on the sidelines of the conference, Sierra Leone’s head of delegation, Ambassador Kargbo on behalf of His Excellency the President, Dr. Ernest Bai Koroma, the Government and People of Sierra Leone; expressed heartfelt thanks to the Egyptian President, the Government and People of Egypt for the invitation, generous hospitality accorded his delegation in the beautiful and peaceful city of Sharm El Sheikh.

The envoy reminisced the cordial bilateral ties between the two sister countries spanning back to decades. The Ambassador recalled the technical assistance provided by Egypt to Sierra Leone in areas such as education, healthcare, agriculture, among others, over the years, which he said, Sierra Leoneans will remain to be grateful to Egypt.

He said Sierra Leone attaches great importance to the conference which he said will be a major milestone in the implementation of Egyptian Government ambitious growth program which seeks to attract billions of dollars in foreign investment over the four-year period.

Ambassador Kargbo described the event as a catalyst for Egypt’s economic development and an opportunity for Sierra Leone, international political and business leaders, as well as investors and institutions, to participate in major development initiatives across a wide range of sectors.

Egypt, the Ambassador concluded, has demonstrated its sheer commitment into transforming its own economy through the right regulatory reforms, through the right policies, as well as presenting the right set of investment opportunities.

In the speech marking the end of the three-day economic conference, President Abdel Fattah Al Sisi reiterated his commitment to peace and growth as he sought more investments from the international community, after receiving commitments worth billions of dollars.

The Egyptian President stated clearly that he aims to hold an annual economic conference in Sharm El-Sheikh that would not be just for Egypt, but for all countries struggling economically.

The elated President, who invited youth organizers of the conference on stage with him where they all took a selfie, disclosed that the conference has seen Egypt sign foreign investment agreements worth at least $US 158 billion – a move, he said, is not only good for Egypt, but the African continent as a whole.

The President also described the three-day summit as an overwhelming success, recognizing companies and governments for their vote of confidence.

“I would like to thank you all who came to this event —Heads of State, Prime Ministers, Ministers, Envoys, and of course Monarchs and Princes,” he showed appreciation to a jam- packed auditorium, where crowds gave him several standing ovations.